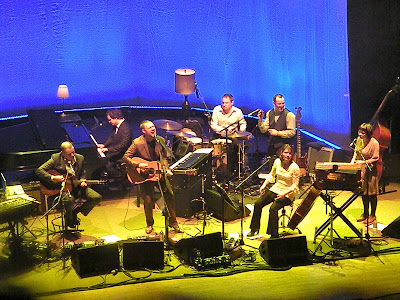 We've seen David Gray before - recently actually.  He and Ray LaMontagne played a double bill at the Molson Amphitheatre in August. (see blog here) That show... ehhh, not completely enjoyable for reasons that were not the fault of the musicians playing that night, so we decided to give him another try, in a venue that was more suited to his genre.  Massey Hall is the right place for his genre of soul baring stuff.

We were late getting tickets to this show, so ended up in the gallery.  Good seats, you can see everything, however, gallery seats (the balcony ABOVE the balcony) are wooden and very close together.  I have very short legs and still felt folded in half and have a dent in my knee from where it was wedged up against the seat in front of me this morning...and the tall guy next to me resembled someone folded into a clown car so can't imagine how he feels today.  The contortionist position that was crippling me by the minute was a wee bit distracting and I'm paying for it this morning as every joint is launching a very vocal protest.  No pain, no gain though...I'm no artist, but I'm willing to suffer for the art of others.  :-)

David came out on stage to introduce the opening act (I've never seen that before...was kind of cool).  Lisa O'Neill, very Irish, was discovered by him on You tube.  She was quirky, and confident, and good... jury is still out on whether or not I liked her.  Her bizarre nature and enunciated delivery in strong voice was... interesting.  She did a cover of "Raglan Road" that Jakki (my true Irish music buddy who knows about this stuff first hand) said was the slowest stripped down version of the song she's ever heard...that it is normally a rousing 4AM drunk outta your gourd sing along at the top of your lungs song... Not having any particular life experience to the song, I found it very pretty in it's quietness and it was a sweetly mournful change-up to her comedic 'pluckyness'.

After a brief intermission, David Gray and his band arrived on stage.  As expected, he was all British dapperness decked out in a full brown suit.  He was downright shiny.  One of the things that irked me at the last show we saw was his polished buttoned down professionalism (before you balk with a "what the hell is wrong with that", let me explain...):  When I'm seeing a live show, I'm not looking for polished technique, I want the artist to let go, feel it, and connect with me on an emotional level.  (i.e., stop worrying about where you're gonna put your hands and just *touch* me already... THAT's what makes it good for me.)  The last show we saw of his, he was flawless, but it was all a little, well, cold.  He did everything right...it just lacked an emotional warmth in that particular sea of humanity setting.  But this was Massey Hall baby....Magic things happen in that building....

First few songs and he had already begun to let loose.  The man moves...he has a head bop like a bobble head, and a crazy spastic left leg stomp/twitch as he plays that is absolutely fascinating to watch.  Love it!  He's feeling it and it's flowing out of his polished British bod! 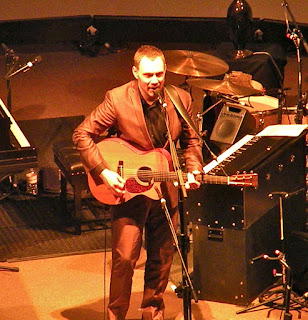 He sat at the piano for the song "Ain't No Love" and explained that he had written this one for a movie soundtrack.  Said that the gist of the song questions what it is that we cling to to get us through...is it love?  Or is it survival?  He thinks it's survival.  And as he launched into the song and got lost in it, he performed it so beautifully and with such feeling that it moved me to tears, no shit.  Hands down, my favorite song of the night.  Was my connection moment for sure.

The band left the stage and he took a solo turn with guitar (included "Flame Turns Blue" and a new, unreleased song called "It Accumulates").  In a venue like Massey Hall, where the natural acoustics of the room provide total magic like no other, I can only imagine how it must feel to be the instrument of such rich and beautiful sound, and to hear it flow around you.  It just has to make your soul right.  After the first song with him solo onstage, a band member started to walk back out to take his place... but he waived him back.  And performed a second song.  Then after that, held up his hand towards backstage with a "one more" gesture and a giddy grin.  (I know!)  He told jokes (yes!  He did!), had the audience laughing, and was full of smiles.  You could literally feel the physical happiness he was experiencing.  For a musician who I would generally characterize as very serious (okay...downright grumpy...dour even), I can't express how contagious the enjoyment was throughout the audience to experience this with him.

When the band did come back to join him onstage the musical goodness carried on, clocking in the show at a good 2+ hours.  A few highlights (for me): 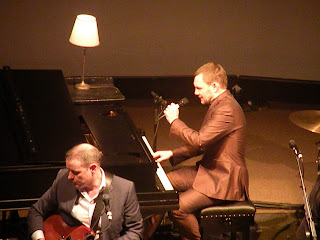 They performed a foot stomping, almost ... country -fried version of Fugitive that was freakin' amazing, a jazzed up version of "Foundling" that I swear we heard him "scat" a little during, and a fantastic version of Babylon.  I LOVE the message in this particular song, but the album version with the "wakachika, wakachika" back beat leaves me a little cold.  They ditched this, and subbed in some jangly guitar strums to change it up and make it a feel good sing a long with a softer, more free feel that absolutely worked.  I took a look around the room, and the audience was singing along, with grins on their faces.

Would have loved to have heard "Nemesis", one of my favorites of his, and "Forgetting" off the new album, but unfortunately they were left off the set list for this show.  No worries, experienced ample goodness, and the tone of those two weren't really in keeping with the happy feel of the night.

Such a great show...I watched David Gray experience joy last night, as a musician, as a performer, and as a person.  And we in turn experienced it with him.  I often say that I worry about my favorite serious artists lightening up because I don't think the art would be as good...but now I'm not so sure having seen what I did last night.... Gotta say...He touched me, just the way I like it.  It was definitely good for me.

Set List (not in order, 'cause anyone who was actually taking notes is apparently still in bed)

Only The Wine, We Could Fall in Love Again Tonight, Lately, Gathering Dust, Sail Away, Ain't No Love, Babylon, The One I Love, Flame Turns Blue, Hold On, It Accumulates, Fugitive, Kathleen, Coming Down, Foundling, Holding On, A New Day At Midnight, Davey Jones, From Here you can almost See the Sea, Babylon, This Year's Love, Please Forgive me, Sail Away
Posted by L.C. at 2:18 PM