The two quotes above, are among a long list of reasons you need to get yourself to a Jory Nash show....for the music, the stories, and the fantastic post show feeling you take home with you.  I've written about Jory Nash before, so this will be my second heaping of praise for his live performance.  (read my previous blog from last fall here).   I've actually had a hard time putting into words what I felt about this show.  Sitting here several weeks following it, I wondered why that was and why I couldn't just pour my thoughts out as I normally do for these posts:  direct brain to keyboard.  Maybe because over the past year I've gotten a bit of a sense of who Jory Nash is and how that relates to what he puts out into the musical universe.  I think he's "good people".  From what I can glean, he is a real, genuine, stand-up guy and an artist in the best sense of the word.  He is creative and limitlessly talented.  And this is a life to him, and not just a business.  So this post actually means something to me in that I want to get it right and more importantly...I want to get it "true".  What I can say without question, right off the bat without further thought is this:  I don't believe there was a single person in attendance who was not completely charmed by the man and the uniquely enjoyable show he put on.  He's just got that quality in him that draws you in, you know?
As with the last show, he made his rounds to chat with people before things got started, and I did speak with him briefly.  He made an excellent point about the venue, Hugh's Room, and how it is an important place for artists like himself.  It's the Goldilocks solution really - not too big and not to small, but "just right" for an artist like Jory who has a loyal following requiring something larger than a small bar, but not too large as to lose the intimacy that a show like Jory's absolutely thrives on.  Hugh's is a great venue that I really need to make a point of frequenting more often.
The show: 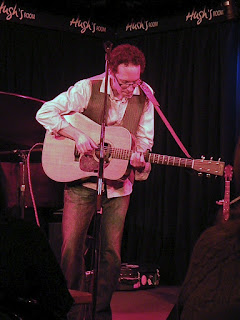 ﻿Some people are just naturally great story tellers and Jory Nash can count himself within that lot.  (See the opening quote of this post from Jakki...we really did laugh AND cry, and then laugh some more...a lot!)  While his stories are sometimes just extremely entertaining anecdotes between tunes, a lot of them also let you into his head on what the song was about and what it means to him.  (a peek inside "Joryland" as he referred to it).  And while the songs stand on their own, having a feel for what they mean to him personally was a great enhancement to the music.  Whether the tune be folky/western/gold rush fare, soulful/heartbreaking ballad, or just good times, the stories give you a feel for Jory as a person, what matters to him, and his thought process on the song.  This was a really enjoyable addition to the music...And musically, it doesn't get any better.  (ummmm....save for the banjo tunes.  I'm really not a fan of the banjo.  However, Jory himself acknowledged that a lot of people aren't when he picked his up and said "no instrument has the power to divide a room quite like the banjo.....except maybe the bagpipes..." (ha!)).  The couple of banjo tunes he did play were good....just not my thing.  (I can folk it up with the best of 'em, but the banjo edges over the Lindsay line...along with the organ...and the accordion, and the ukulele (unless you're Eddie Vedder, and then it's awesome)).  For the most part, Jory moved between the acoustic guitar and the piano, but even did a a tune a Capella.
I usually select pre-show a couple of songs I'd like to hear, and he did 2 out of the 3 I had picked out.  (Have yet to get "Oh Baby Call", but I keep hoping!).  "Careful How you Break My Heart", one of my favorite Jory tunes ever for it's heartfelt lyrics, deliberate enunciation adding to the effect, and mournful melody, opened the second set, and "Love on the Northern Side", a song that I have an emotionally affectionate tie to, absolutely slayed me live.  We were also treated to a few new tunes that have yet to be recorded and I really look forward to the new album next year so I can dig into these.  ("Truth" was one I immediately loved).  But the stand-out tune of the night was "When I walk out".  Jory told us the story behind the song, why he rarely performs it anymore because he needs to be in that emotional place to make it real, and why he was able to perform it at this show.  His raw honesty in his explanation hit home to all of us. When he began to play it, we knew he meant it from his core and the real beauty of the song and its meaning to him had everyone literally wiping away tears.  That's my kind of musician - one who feels when he sings, and I thank him for sharing with us and in turn affecting us on that deeper level.  'Cause that's what it's all about to be an exceptional musician isn't it?  The emotional connection with your audience?  The ability to truly "move" you?  (yes folks, yes it is.  In accordance with the unwavering laws of Lindsay's Music, I deem it so.)  The whole set list was fantastic and there really was something for everyone worked into the show.
As a lover of all things music, my genres of preference tend to be all over the place.  I like a wide spectrum, from hard and thrashy to soothing and meaningful and a plethora of things in between.  Jory fills a few niches for me along that spectrum... and a Jory Nash show is the high end comfort food of musical experience  - you leave it warm, filled with incredible goodness, completely sated and happy.  This man is truly the real deal.  Since my (above quoted) intro and subsequent dive into his stuff 2+ years ago, I've been following him, and he'll always be a staple in my musical menu.  I think that's the thing with Jory's stuff...once you've heard him, and especially when you've seen him in a live setting, you become a lifelong fan.  You know he's going to keep putting out quality music to keep you coming back for more.  But don't take my word for it, just go see him next time he wanders through your neck of the woods.  I promise you'll be glad you did.
For tour news, more info on Jory, or for links to album/song downloads, check out his webpage here:  http://www.jorynash.com.

-Girl from the North Country
-Again, Again
-Homily
-Blues for Monticello
-I Second That Emotion
-The Robbery
-Woodstock
-The Nighthawk
-An Old Invitation
-A Bit of Blue
-Charlie
-Spaz Loves Weezie

Encore:
-Unwavering (a Capella)
-and a second bonus song, that I'm not too sure of the name of, but it was a silly, joyful tune involving candy following a side splitting lead in about Jory's brush with the law as a youngster....
Posted by L.C. at 12:55 PM