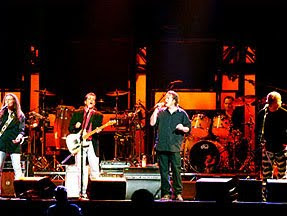 I sooooo love the Eagles.

I know that they are "old" (no offense intended, but in the realm of the touring rock world, they are up there, Glenn Frey being the youngster of the bunch at 61), but they have been a favorite of mine since my teenage years.  I've always said that I love all different types of music with two exceptions...country twang and thumping club type dance/techno music, and the Eagles do have a certain country flavor to them...but they are an exception to the exception.  They've always been like home for me...I get bored of my musical selections and I can put on an Eagles live disc in the background and just chill.  Wasted Time is one of my favorite heartbroken wallowing songs EVER, and I think Don Henley is a brilliant lyricist for putting real emotion into words (even have a specific part of "Heart of the Matter", (the actual sheet music notes as opposed to the words) of the song, tattooed on my arm because what it says speaks to me and always will).  So in short...I've been a fan for decades.  Whether that affects my musical cred or makes me outdated (and it shouldn't....they are at this point, musical legends), I could care less.  Respect people!


A quick word about the venue.... I intensely dislike the Rogers Center (formerly known as the skydome) for live music.  The place was not designed for optimum stadium rock.  Saw U2 there last year and it wasn't bad because they had the dome open, but last night, with it closed, it was hot, and the acoustics were shit.  Sound was bouncing back from the walls and you got an echo as a result, and if you didn't know the words to the songs there is no way you could hear them clean.  In addition, when the lights go out, it's pitch black...attempting to find our seats in the dark was a complete disaster and I found myself thinking "if a fire breaks out, I'm going to die a horrible, horrible death by either burning up or being trampled" and I had a little debate with myself on which would be preferable (still no conclusion on that one folks).  Not very rock and roll of me, I know, but the amount of people crammed together was a little overwhelming.  Was able to let it go once we found our seats and staked out our sardine like personal space.  And of course the vastness of the place made for an ant like band....giant screens allowed us to see details, but I abhor watching a band on a screen, so tried to concentrate on the miniatures with quick screen glances to check in on where everyone was on stage.  And finally...the restrictions... it truly was "Hotel California" last night...you can check in, but you can never leave.  No re-entry once you're in.  So you and 40,000 folks are spending the next 4 hours together without a breath of fresh air whether you like it or not.  And no cameras.  So what I really mean to say is...Rogers Centre blows as a venue
All that said, it was an incredible show.


Dixie Chicks opened....in light of my hatred of country music, surprisingly I don't actually mind them.  They were enjoyable but found it getting a little shrill by the end of it (that's a lot of high pitched voices echoing back at you even if they are flawless!).  "Not Ready To Make Nice" was pretty powerful live though...very overplayed song, but I like it, and feel it is a great musical response to a traumatic and incredibly unfair event for the band and what songwriting from the soul is all about...they still mean it and it resonated.  Respect to them for standing up for their freedom of opinion. 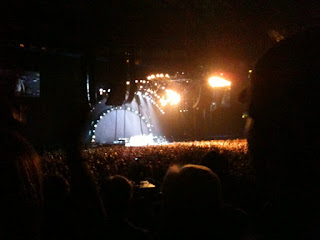 Eagles took the stage at 9 (right on time...how punctual!) and the four boys opened up the festivities with Seven Bridges Road...a testament to their stellar harmony skills.  Then their touring band joined and the journey began.  Surprisingly, they pulled out Hotel California early on in the set (like 3rd or 4th song) which got the crowed riled up into a giant sing-along.  (was as wild as the crowd got...40,000 people...sat for the entire duration.  My feeling is, if the 60+ year olds on stage can stand and play for 2 hours straight, shouldn't we be standing to indicate our enjoyment and appreciation?  Hmmm.  Although the girl in front of me spastically waving her effing glow stick nearly gave me a mini seizure...I guess not everyone can indicate their enjoyment in the same manner and we all need to adapt...but she very nearly ended up glowing from the inside had my rage urge to ram it up her ass taken over).
They covered the entire spectrum of hits....70s on up.  I was telling someone yesterday that I feel the Eagles songs stand the test of time and I still feel that way after last night, save a few exceptions.  Some of the early 70s tunes really require a disco ball and the boys decked out in full porn 'staches.  (i.e. "One of These Nights" and "Witchy Woman"), but they were enjoyable nonetheless and a reminder of the vast career span.  Each band member had their stand out moments.  Timothy Schmit's lead vocals on "I Can't Tell You Why" was beautiful and I would have loved to have seen him take a turn at the front a few more times.   Joe Walsh fronted quite a few songs and was incredibly enjoyable to watch....the man is a complete cartoon (his mouth is so "Grandpa Simpson" like that I was almost hypnotized watching him with big goofy grin on my face!).  "Life's Been Good To Me So Far" was performed by him with wink, wink, nudge, nudge homage to the life of a rock star with a montage of old photos of the band (got my real life of the boys in porn star 'staches here!) He certainly entertained and his underrated guitar skills were highlighted in a number of the songs.  Glenn Frey was also enjoyable to listen to and pleased the crowd with his fronting turns.  But no surprise, it was Don Henley that made the night for me.  Don Henley is still one of the coolest men alive, in my humble opinion.  His talent is effortless and laid back.  Whether singing from his drum kit or strumming his guitar at the front mic, he commanded attention with his raspy yet strong voice.  Was pleased that they included a couple of his solo tunes - "Dirty Laundry" and "Boys of Summer".  Would have loved had they included "Heart of the Matter", but no dice.  He closed the show with the obvious choice of "Desperado", standing at the lip of the stage, arms open, embracing the crowd with the beauty of his voice.  I know the song has descended into cliche over the years, but performed live and relying on the strength of Henley's vocals it gave me my goosebumps moment and was truly moving.

Every live CD I own, and the majority of the live footage I've looked at over the years, the one song I really wanted to hear, "Wasted Time" is always included.  Sad that they left it out this time, likely the only time I'll ever see the Eagles live.  But no matter, I was entertained to the max regardless, and I had a little car concert on the way home singing it at the top of my lungs, feeding off the afterglow of an awesome live music show that will stay with me for days.  There really is nothing better than that feeling.  Thank you boys.
Posted by L.C. at 12:10 PM