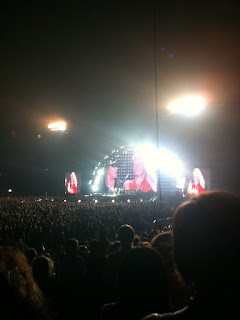 We got talking about Bon Jovi yesterday before the show and I came to the realization that I was listening to him waaaaay back in my teenage years.  We're talking early 80's here and I have vivid memories of Bon Jovi being a large part of that.  From the posters on my wall (Jon had the BEST hair and was sooooo dreamy!), to sitting on my living room floor with the girls around the video countdown swooning over Jon eyeing the camera, to rocking out singing into my hairbrush (yep!  Did it!) in my bedroom to "Runaway" playing via cassette tape from my ghetto blaster (KNOW there was even a little Richie tribute on air guitar!).  I guess it kind of amazes me that this many years later, Bon Jovi is STILL selling out massive arena venues like the Roger's Center on a regular basis 2 nights in a row.  We are talking in the ballpark of 42,000 capacity x 2...full up.  I relay the words of a friend (who's musical taste I respect greatly) when I sheepishly admitted to having tickets for this show:  "don't feel bad about going to Bon Jovi, their longevity has earned them respect in my book, and who doesn't like a good Bon Jovi anthem?"  Indeed!!  While their music may not be groundbreaking, it can be argued that they are still somewhat current, in that they produce new material every couple of years.

Kid Rock was the opening band.  I like Kid Rock.  I even own some Kid Rock.  Bob Ritchie, the guy, I don't really care for a whole lot - think he's the epitome of redneck sleaze (he wears it proudly in fact), and man, the whole unwashed look he's got going on is really gross, but as a musician, I think he's got some chops.  Again, not groundbreaking musical poetics, but he is talented  (took to the guitar, piano and even rocked the turntables last night, and he's got a very versatile vocal range and a multi genre aesthetic that sort of fascinates me).  He worked it with a capital "W" and everything was BIG.  The flaw I found however, was that he was just too much for an opening act.  He had 45 minutes to do his thing, so there was no build to insanity, you were just sort of plopped into it - very "in your face", and his slow down midway by inserting the Country ballad "Picture" (then immediate ramping back up into guzzling from a bottle while asserting he's the the mo'fo bad ass) seemed out of place.  As an opening act, I wasn't prepared for, nor did I have time to assimilate into his circus...I'll repeat what I stated to a friend on my FB wall last night during the performance that sort of sums things up:  "There is a lot of fire!  And he has a shiny belt buckle!".  Not sure I'd attend or not, but I'd be very curious to see what a headlining show of his would be like.  Where I come prepared for his brand of thrill ride, strap in and go "whoo hoooo" for the duration.

Bon Jovi took the stage at exactly 9pm.  The stage was huge, and so were the screens, which was a good thing as the vastness of the Rogers Centre made the band look like ant people.  I hate watching a band on a screen, but knew this was going to be the case for this show if I wanted to catch any form of their personality.  I HATE the Roger's Centre as a venue....won't digress into this - for full description of why, check out my Eagles review where I go off on a lengthy side rant.  I will say that this will be the last time I darken the doorway of the Roger's Centre for a concert....will have to be an awfully big lure to get me back in that building again.

Bon Jovi KNOWS their audience.  They KNOW that people are coming to see them in large part based on the nostalgia factor, and in such, they played 27 years worth of material, with all those aforementioned rock anthems taking their place in the set list.  There were only a couple of songs off the new album, with a few off albums from the last decade's offerings, but the majority were the crowd pleasers from days gone by, and the stadium full of hot sweaty people ate it up and sang along.  You could feel the "whoosh" of the crowd's excitement when one of the familiar riffs started up - Bad Medicine, You Give Love a Bad Name, It's My Life (envision the "buh, buh, na na na na..na" with fist pump following the lyric "This is a song for the Broken Hearted").  And then there was the converse, the entire crowd swayed to the ballads - Bed of Roses (can't tell you how much I loathe the syrupy sweetness of this one, but seems I'm alone in that sentiment), I'll Be There For You, and one of my personal favorites, Always (sickly sweet, but there's a message there I identify with....you take things for granted, you're going to lose them and regret it big time later when it's too late).  It was a great mix, with the only ones I felt the real lack of enthusiasm for being Lay Your Hands on Me (which is a shame, because I usually enjoy when Richie takes over fronting vocal duties), Keep the Faith (seemed the boys were running out of steam), and We Got it Goin' On.


The Boys came back for an encore and played the aforementioned "Always", and then "Wanted:  Dead or Alive".  Yeah, it's kinda kitchy.  But for a song born out of the 80's where the "on tour trials and tribulations ballad" tune was a staple, I think it's a well done song with some neat metaphors and it still holds up today in my very humble opinion.  And of course....they capped off the show with their signature tune......one of the coolest concert moments of recent memory, was Jon saying "you know this one right?", stepping away from the mic and letting 42,000+ people belt out the chorus to Living on a Prayer in complete solidarity - made me smile and feel at one with the crowd before the band picked up and they brought the house down with the full song.  I'm not a people person (especially a "drunken, weaving, hollering mess of mass morons" people person), but these are the moments that I'm happy to be one of tens of thousands in an arena.  As someone who much prefers an intimate setting where my soul is moved by an artist performing, and forming a connection to the songs due to that intimacy and artistry, it takes a moment like this to make fighting the sea of drunken humanity, temporary hearing loss and sweating my ass off all worth while.
Was even softened (somewhat, but still not coming back) on the choice of venue...Jon thanked the fans for coming, acknowledged that the venue likely WASN'T their favorite place to see a live show, but that in the span of their career, they had played every venue in Toronto from the El Mocambo to the ACC...with this one exception, the biggest, so they wanted to give it a try....
All in all - 'Twas good! 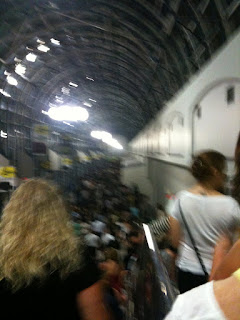