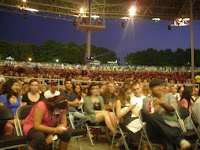 I get annoyed when I read a review of a concert by someone who obviously is not a fan of the band/artist or at very least, genre.  Music is entirely subjective, so if you are not a fan of a particular genre going in, chances are, you aren't going to "get" the art, completely miss the point, and the review will not be favorable.  I'm not a fan of Rihanna.  I'm not a fan of her genre of music.  But I was handed free tickets (of $300 face value each) to the show and knew my daughter Emma would be over the moon to go.  Raise your hand if you have never violated your musical integrity in order to make your offspring happy....I dare ya!  (and it could have been far, far, FAR worse....)  So if you ARE a fan of Rihanna, I acknowledge I have no business reviewing this show.  But it's a blog, I'm not being paid to do it, so feel no sense of responsibility to the artist(s).

The Molson Canadian Amphitheatre, is one of my very favorite venues in Toronto to see music, and our seats, were friggin' amazing.  On the floor, 4 rows back, and could literally spit on the stage (if I were the spittin' type).  Felt a bit of a pang waiting for the show to start, that it was this particular show I had such spectacular seats for, but Emma was bouncing with excitement, so it was all good. 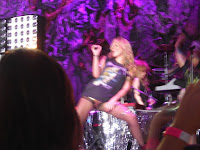 You know that song right?  That Tic Toc song?  That sums up my knowledge of Ke$ha going in.  Folks...that's about all you need to know.  This young lady (and I use the term "lady" loosely) needs to get her act together if she doesn't want to end up on the one hit wonder pile.  I am pretty sure her "band" wasn't playing their instruments (little bit 'o air guitar anyone?  Seriously?  Are you kidding me?).  There was a lot of prancing, gyrating, glitter, and tongue wagging.    Can she sing?  Who knows.  Pretty sure I don't care.  My advice to young Ke$ha is to spend more time on writing and her touring band selection than perfecting her crotch rub and dance moves.  Just sayin'.
The intermission entertainment:
As Ke$ha is finishing up, the girl beside me (decked out in halter dress and high heels, with humongous breasts threatening to bust out the sides) dances into her beer at her feet and tips it over.  Then promptly accuses me of knocking it down.  The "Yes you did, No I didn't" ridiculousness ensued and then she stomped off, to return minutes later telling me that "I ruined her night".  My patience level not being at an all time high under the current circumstances, I gave her a "look honey, I watched you knock it over.  If it was me, I'd buy you another, but it wasn't.  We have a long night ahead of us, I want to enjoy it with my kid, so get over it".  She responds with "I'm sorry, I'm having a bad year".  Ha!  Wanted to go buy her a beer after that!  Situation repaired, I turned my attention to Emma who was full of chatter:
Then the lights went down....
Rihanna: 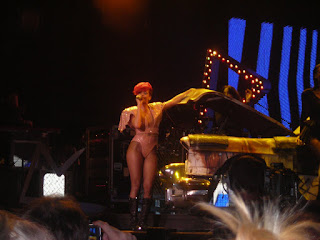 And the show begins.  Rihanna takes the stage wearing a dress that lights up.  Was  a hint of things to come.  There were no less than 7 costume changes during the little under 2 hour performance, each more outrageous than the last.  The sets were incredible (she rode the gun of a tank for a bit while singing and there was a car, and lots of cool structures), and there was a plethora of interesting things to look at, complete with acrobatics and costume changes for the dancers.  One of the coolest moments was the appearance of the backup dancers in these stilted futuristic monster costumes.  Clearly, the set budget had no limits! 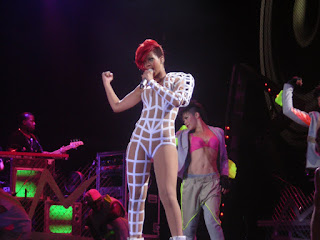 "ah...Toronto, could you lend a hand?  I seem to have gotten a little twisted up in this here duct tape...." 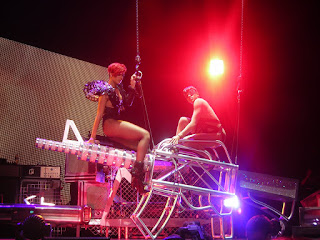 So need one of these for the office!
She ran through all the hits (I think?  Not overly familiar except for that dreadful Umbrella song, but making an assumption because the audience was going bat shit every time a new song started up).  She was a great performer - her voice was strong, she moved in ways I could only dream about duplicating, and she was charming and gracious to the masses at the sold out amphitheatre.  Cute as a button, she was.  And perhaps Ke$ha should have been taking notes on how to sell sexy without becoming trashy.  And while I'll never get her musical aesthetic, I appreciated that she was "good" in the grand scheme of her genre. 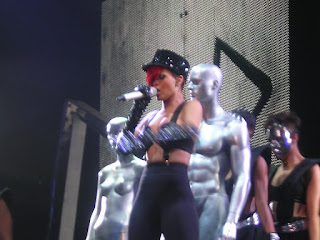 What else can I really say, being unqualified to really review this show as a fan?  I'll say this.  I was entertained.  I had a whole heap of fun.  I'll liken it to a highly enjoyable movie where the visuals were fabulous, but the soundtrack was "meh" and I won't be rushing out to buy it any time soon.  Still not a fan of Rihanna or the genre, but will give the show a thumbs up based on my entertainment level as a whole with acknowledgement that she gave the (paying) ticket holders what they came to see.

And my girl had the best time ever.  Sang, danced, hugged me every few minutes to thank me for bringing her.  Really, what else is more important?
Posted by L.C. at 2:31 PM