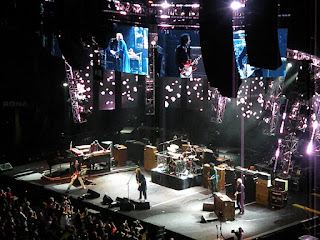 Tom Petty was someone I've always wanted to see live - and finally got the opportunity last night.  He's one of those mainstays....  always good and always enjoyable to listen to.  Full Moon Fever was my intro to Petty back in the 80's, and is a great (Maritime kitchen) party album.  Remember vividly sitting around in an apartment in Fenwick in Halifax and the entire room bellowing "Free Fallin'".... a definite nostalgia song even though it wouldn't be my favorite of his.  The man just radiates laid back cool rock n' roll.  I had no idea just how accurate this was before witnessing him live....
The "opening band" for the evening was Crosby, Stills & Nash and I need to devote a little time to them, more so than I ever have to an opening band in one of my blogs.
Why?
Crosby, Stills & Nash are not an opening band. 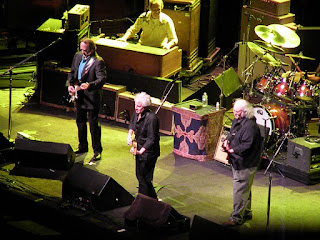 The boys hit the stage and proceeded to school the audience, consisting of a multitude of generational representation, on what true musicianship really is with their brand of 60's hippie granola rock that was awe inspiring on just so many levels.  They sure as hell didn't look like rock stars....Crosby sported a belly Santa would envy in addition to the trademark long white hair with balding pate, Nash swayed across the stage in bare feet, and Stills ripped up the guitar with blistering intensity from his spot in the corner.  But man, they still have it.  Ranging in age from 65 to 69 they possessed the power to own the audience, and that is a true testament to their talent.  I have never witnessed an opening band play an hour and a half set, with encore.  I have never been drawn into a giant sing along for an opener.  And I have never before last night, had the hairs on the back of my neck stand up on end several times having been given chills by a moment of performance from an opener.  Of note, they performed Young's Long May You Run, followed by their rendition of the Stones' Ruby Tuesday that were both so beautifully done it touched me to my core.  Add in the love fest of "Our House" and "Teach Your Children" to chalk up a few more skin humming moments.  I felt the peace and love....and embraced my inner flower child.
To sum up their portion of the show, I refer to a discussion I had with someone I used to know who expressed a couple of nuggets of wisdom on CSN.  He said:  "Crosby Stills and Nash shouldn't open for anyone", and "it would be difficult for anyone to come close to matching the incredible vocal harmonies of CSN".  I have to agree here.  I likely will never go out and buy an album of theirs, but I feel honored to have been able to see them perform live and have an understanding and a deep respect for their essence now.  Definite moment for the books.
Enter Tom Petty and the Heartbreakers. 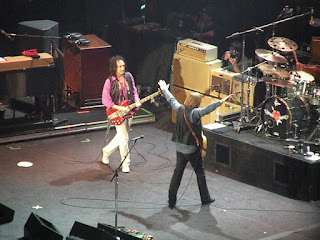 Tom smoothly glides on stage in full trench coat....oozing effortless cool.  He plays like it's a second nature as breathing, and to borrow a phrase from Mandy, a fellow concert goer, he "conducts" the entire show.  He's been doing this a long time....he knows how to get a reaction, but it's with an ease and subtlety as opposed to manic chaos that generally infuses bands of younger ilk.  He raises his arms slowly and draws thunderous applause from the audience.  He dances....but in a fluid, dream like crawl through the air, punctuated with a single hip swing as cue for audience to cheer.  He faces the drums, back to us, and with a fist, punches out in perfect relaxed synchronicity with a single booming drum beat.  He plays the guitar and sings like he's having a calm but engaging conversation...and even when he speaks, there is no "How you doin' Toronto!!!" bellow, but rather a relaxed "We've got a lot of songs to play for you tonight, so we're gonna get going on that".  We, the audience of 20,000+, are attending Tom Petty's kitchen party jam.  Crack a beer.  Sing along.  Or, in the words of Tom himself (belted out by every audience member on song number 2 and acted out by several judging from the aroma permeating the air):  "...let's get to the point, let's roll, another joint...."
I deliberately did not listen to the new album before the show.  Had heard mixed reviews on it, so decided to wait it out and make a decision based on hearing it live.  I liked the new album material.  It's not classic Petty...it's very bluesy....but good.  Sometimes "different" from an artist is still okay in my books.  It sticks with his general musical aesthetic of intensely relaxed cool, so while stylistically different, I can see the continuity.  Will be giving the album an attentive listen. 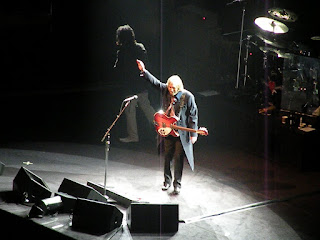 They played a good mix of hits from the vast library.  Lots of favorites.....save one.  I've been S.O.L. for a couple of shows from established lifelong artists this year....first with the Eagles not playing my choice of "Wasted Time" (unheard of!), and then with this show, where they did not play "American Girl"  (Even more unheard of!  They were even selling pink American Girl t-shirts at the swag shop as evidence of how signature a Tom Petty song this one is!).  Even with this omission it was an enjoyable set of faves.....further cementing the kitchen party feel as it felt familiar as home.  But I think going forward I will not be picking a favorite, as this seems to be a sure fire way to have it omitted from the list for some reason.  (ah....Music Gods....C'mon!)
My sole complaint would be the length of the show.  Perhaps coming off last week's Green Day show where they played a solid 3 hour set, I felt this one, clocking in at an hour and 45 give or take, extremely short, especially since CSN put on such an epic example for an opener.  There was no lack of material for them to play....and I kind of wanted to extend the party.  I suppose, we all have to go home sometime though.  Thanks for hosting Tom.  It was a blast!
Set List:
Listen to Her Heart
You Don't Know How It Feels
I Won't Back Down
Free Fallin'
Oh Well (Fleetwood Mac cover)
Mary Jane's Last Dance
Kings Highway
Breakdown
Jefferson Jericho Blues
Good Enough
Running Man's Bible
I Should Have Known It
Learning to Fly
Don't Come Around Here No More
Refugee
ENCORE:
Runnin' Down a Dream
You Wreck Me
Posted by L.C. at 2:40 PM