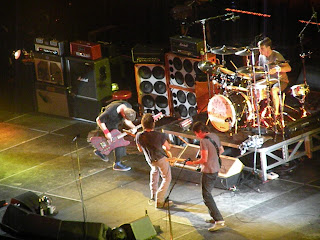 I was a Pearl Jam virgin.
Not in that I've been completely untouched by them... only that I've never seen them live before last night.
In the early 90s, when they first hit, I immediately loved them.  I think "Ten" is one of my favorite albums of theirs, because it struck me at the time when the whole grunge/alt movement hit out of Seattle.  I formed a connection with that album because it was connected to a specific time in my life.  So I've always "known" Pearl Jam.  Furthermore, I adore Eddie Vedder - I really think that he is one of the living Gods of music.  He'll be one of the greats they talk about, no question.  But when I'm looking for something to listen to, they are not generally a go-to band for me, in the sense that I "feel" when I listen to them.  When it comes to me and music, this can change in a heartbeat... it only takes a lyric or a chord or a drum beat to unexpectedly hook me in and then I become obsessed with that particular band/artist.   It depends on my frame of mind and things I'm experiencing at the time in order for the "switch" to be flicked.  For Pearl Jam, I enjoy them greatly, but was never emotionally connected to them like some other bands/artists.  My love however, has always run deep for Eddie and that will never change.  He is a great voice in rock - in the unique way he sounds, the things he stands for, and his musical creativity.  It was about time I saw them live.
I have to say...I wasn't sure I was feeling it when they started out.  It had all been built up so much for me that I was thinking to myself that yes, okay, they were good, but it wasn't anything earth shattering.  Don't get me wrong - the music was good, Eddie was all high energy and amazingly fun to watch and I started to think that Mike McCready may very well rival Eddie as my favorite band member after watching him play.  So I was entertained, no doubt, but no goosebumps.
Then they played Dissident and things started to take a turn and they started to pull me in.  Eddie took a break to talk to us for a bit and relayed that the first time they played in Toronto was in 1991.  He said they "played 7 songs that night.  But we'll play a few more tonight...maybe 8".  (they played an epic 30 songs... 30!)
And my initial thought that Eddie Vedder is a musical God was bang on.  I've never seen a man exude musical goodness in the way he moved, the way he sounded and the way he just "became".  The man just goes with it.  Love it.
It did surprise me that there were very few moments of discussion.  Knowing the band and their involvement in a lot of issues, I thought they would be a bit more chatty.  They did mention the release of the West Memphis Three as an intro to the Fixer, and they teased us a little with the possibility of a Neil Young appearance for the second night in a row during the first encore ("Sorry, Neil couldn't make it - he had to work tonight"), but for the most part, it was all about the music. 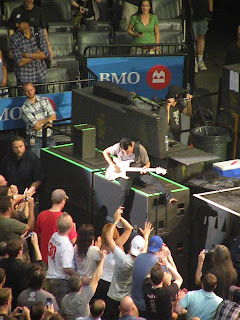 And the music did get continuously better.  Seemed there was a massive build and I definitely enjoyed the second half of the show more than the first.  Favorite moments?  Do the Evolution and Alive got the crowd frenzied and it upped the energy of the ACC.  I also really loved Wish List, Present Tense and Light Years, and of course the cover of Baba O'Riley was mint.  But finally, worthy of honorable mention, they closed the show with Yellow Ledbetter.  This is a great song.  Here's the thing with that "switch" I talked about earlier and whether or not I'll grasp on and dive in in an obsessive way to a particular band/artist....  I have no idea what Eddie is singing in this song - the lyrics are a jumble of mumble-itis ("mumble, mumble, box or a bag" (?)).  For this one, it's not necessarily about meaning that turns me on, its very much about the auditory pleasure it gives.  I listened to an interview recently by another musician I really dig, where he explained that in the songwriting process, he believes that melody is probably more important than lyrical content - that the lyrics are important, but the "hook" of a great melody is what draws one in to give it a second listen...and then the lyrics keep you.  I was not sold on this concept initially, because my love of music is very lyrically driven - it can sound pretty, but if you don't have anything relevant to say, I'm not going to form a connection to it.  I think this is a good example of what this musician was trying to convey.... The melody or some other musical aspect of a song other than a verbal language consisting of lyrics IS what the artist is communicating to the listener in Yellow Ledbetter.  Love the bookending guitar solo bits in the live setting...performed ever so wonderfully by Mike McCready, sitting on a speaker for the ending notes, plucking it out solo while the crowd swayed beneath him adoringly.  Listening to Yellow Ledbetter with a whole new appreciation today.  That was my goosebumps moment.  What a fitting end.
Was it awesome?  A fantastic night of rock and roll?  Yes.  Was it the best concert ever?  Not sure I can give it that brand because I didn't have a non-stop emotional connection to it until closer to the end.  But I will say this - I believe my "switch" has been flicked.  I've been listening to Pearl Jam all day.  The desire to "re-live" always tells the tale. 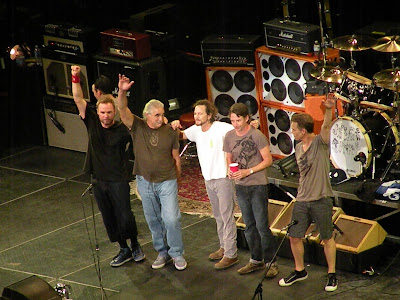