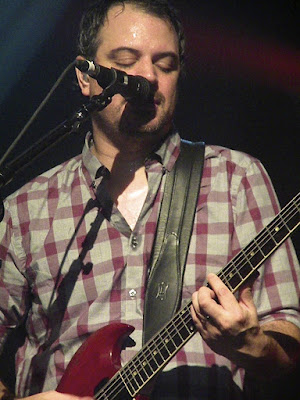 Friday night I went to church.  Not the judgy, "fire and brimstone shall be your fate if you don't abide by our archaic rules" kind of church.  No.  I sought out a whole other kind of worship for the evening.  There was no alter...but there was a stage.  We were a congregation, eager to accept communion, and were at times respectful and hushed, yet mostly hollered out our "Amens" loudly and with great enthusiasm.  And at this church, God himself (aka, Matthew Good) showed up to deliver the sermon in the form of some kick ass rock and roll.  Halle-fucking-lujah!

We see Matt Good when he tours.  Period - no questions asked.  (When God comes to town...you go!).  This show offered a sweet deal of a VIP package...where we were guaranteed tickets in the first 5 rows of the assigned seating venue, t-shirt, signed lithograph, and the icing on the already deliciously sweet packaged cakey goodness... wristbands for a meet and greet with Matt post show.  We waited weeks to receive our tickets not knowing where our seats were, so you can imagine my delight (subdued word for freaking ecstasy), when the package came and we had scored front row center seats.

When we took said primo seats, we couldn't believe how close to the stage we were - we were going to be able to experience some serious extreme close-up action.  As per usual, we had a jerky couple behind us who talked through the entire opening band (Daniel Wesley, a band from Vancouver, who were really quite good!)  We were somewhat concerned, but it ended up being all good - he was a Matt Good disciple, so his outbursts were strictly worshipful.  There was one instance however, that the guy cracked me up completely... kept hollering out "Play 'Aspirations'", and when the band launched into "Apparitions", the guy was bellowing out his bastardization of the title at full tilt.  I know you shouldn't giggle in church, but once something tickles you, you really can't help it!

Some shows are about the entertainment...the sets, the costumes, the performances, the dancers, the light show, etc.  A Matthew Good show is strictly about the music.  (not that his "taken over by the music coursing through him" movements are not entertaining, mind you).  The show opened with "While We Were Hunting Rabbits" and was a slow, smooth and soul caressing introduction that steadily built.  The set list was constructed much like a Matt Good song.... slow and deliberate at first, but with a steady escalation in intensity to heart pounding sweaty breathless climax.  "Rabbits" was a treat for MG fans.  It's not a song that is frequently played live (due to length and complexity of vocals), but it was a thing of reserved beauty with Matt at the mic accompanied only by the piano, with the added ambiance of almost total darkness.  Hauntingly pretty.  And the audience was hushed and drinking it in.

The show climbed steadily from there.  He did my favorite tune off the new album (the title track, "Lights of Endangered Species").  I find the new album is heavily instrument vs. lyrics driven.  Lots of different instrumental sounds as opposed to words telling the story.  In the live setting, experiencing them play it for us with the full impact of the musicians wailing away on their respective instruments gave the songs new punch, as expected.  "What if I can't See the Stars Mildred" and "Zero Orchestra", roused the theatre to seat dance (right on the edge, poised to stand) while eventually "Load Me Up" got us to our feet and kept us there with the follow up of "Hello Time Bomb" (with the audience singing along with every word).  These are familiar Matt Good classics that continue to hold up.  He has evolved over the years, but his catalogue of material remains relevant even though it is incredibly diverse and seems to cross a lot of genres.    Looking around the room, you can see the spectrum of MG fans.  Young, old, rockers, rednecks, intellectuals and rebels... his music is able to reach a lot of souls on a lot of different levels.  I like that in an artist.  The only problem I found with this is that you tend to get a lot of assholes in the mix - the audience was rowdy at times, which I embrace at a rock show, however, the idiot women hollering for him to take off his pants/take off his shirt/show them his nipples was just disrespectful and made me wonder why the hell she was there at all... are you there to hear the music or come off as a total bimbo?  Do you know anything about this musician?  but I'm pleased to say he was chatty and would respond to this bouts of ridiculousness with good humor.  I love when he talks to us because his stream of consciousness segue way from one topic to the next is mindblowingly funny.  For a guy who is really well read, and well informed on what is going on in the Political landscape, he really exudes sense of humour at times.  (I started trying to transcribe some of the funnier moments, i.e., the Justin Beiber hair rant, or the reference to Rico being constantly requested, but I can't do it justice without the Matt Good wit, expression and sarcastic tone to back it up, but you can get a feel for what I'm talking about in the short clip below).


He is travelling with a new band (save for Milos, his bassist who has been with him for the last few tours), and they deserve mention.  Drummer Ian (who worked with him before in the Matthew Good Band), Keyboardist Anthony and Jimmy, the guitarist.  Jimmy was just awesome to watch - technically amazing, and obviously loves what he does.  I found myself focused on him for a great deal of the show actually (I know, I know, sacrilegious to be distracted from Matt, but he played a wicked guitar!)  Having followed Matt's fan pages, I was privy to the trials and tribulations of finding new band members and teaching them the material in a very short time period.  Pleased to see that the group of chosen musicians gels extremely well.  I really liked Stu, his former guitarist, but I LOVED Jimmy.

Only disappointment would have to be that my two song picks going in were not played. There was talk that he would attempt "Prime Time Deliverance", and I was giddy with the excitement of the possibility, but no go.  Also, "Champions of Nothing" off of Hospital Music has been a staple in his live shows and it blows the roof off the venue every time, but wasn't a pick for this show either.  No matter - we were treated to an awesome set list, and the presence of "Rabbits" made up for any omissions.

I love Matthew Good.  This is obviously no secret.  And I'm a loyal disciple... I've had very lengthy discussions with people about MG's music and will champion it to the death... in fits of frustration at people who don't "get it", I've been known to tell them to go back and listen again....  That clearly they are just not listening to it "right".  And In keeping with the whole church/religion analogy, my faith in him is limitless and trusting.  There are times when he releases new material, where I listen, and I like it, but am not sure I completely get it...then I hear it performed live and it's like "ah yes!  Of course!  Brilliant!" The Matthew Good live experience is always a religious one, and last night this held true.  I can only suggest that if you don't understand Matthew Good, that you attend and see for yourself.  I have every faith that there is no way you won't be inspired and converted by the experience. 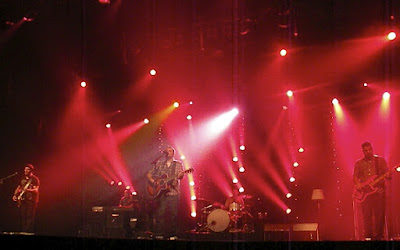 Oh, and the meet and greet?  For those of you who were wondering?  God is a sweet and friendly guy.  And he called me dear (Squee!).  And he smiled and told me to have a good night.  (Can almost hear him saying "Go in peace!"). 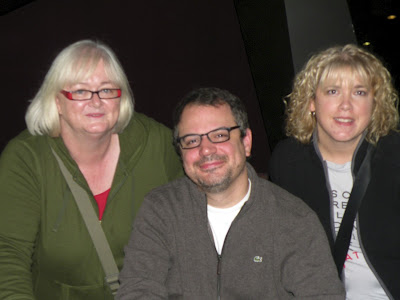 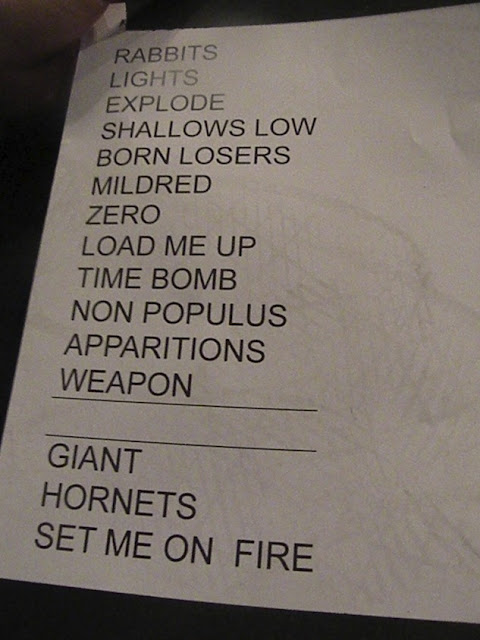