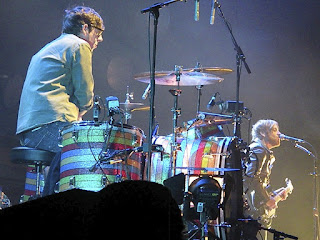 My first introduction to the Black Keys a couple of years ago was, like a lot of my music discoveries, a recommendation....  The song was "Girl is on My Mind" off the Rubber Factory album.  I listened to this tune, and it immediately took hold of my brain.  The awesome guitar licks.  The smoky sexy vocals. The rhythmic, sultry beat.  Simple, but with a great hook.  Totally turned me on.  It was one of those tunes I found myself humming to myself for days.  Then I checked them out, and imagine my surprise, when I discovered that the "band" that produced this little slice of funkalicously soulful awesomeness, consisted of two somewhat nerdy looking white dudes.  Now I say this with complete delight, and no disrespect intended  (I have a weakness for nerds...it's a kinship thing I think, as I tend to 'geek out' a lot). Point being, it's not often you see so much soulfulness come out of the white and nerdy, and they have been blessed with an over abundance of it, so much so, that it makes them unconditionally and indisputably über cool!  Love.  Them.  Madly.

I have followed (and loved them) since; through Attack and Release, the Brothers album and their latest, El Camino.  We managed to see them touring the Brothers album last summer and thought they were stupendously good live so added them to the "must see" list.  For this current tour, the world seems to have woken up to their awesomeness and they are an incredibly hot ticket, so we were pleased to be able to nab fan club tickets on presale prior to their Toronto show selling out.

As with a lot of fan club pre-sales these days, you purchase the tickets, and are guaranteed to be within the first X amount of rows, but you don't know exactly where your seats are until the tickets arrive in the mail.  When our tickets arrived and listed "Floor - row 3, seats 35 and 36", we thought that would be great!  We have had floor seating at the ACC before and vowed never to go back due to our vertically challenged status and lack of slant/grade of the floor for viewing over the top of heads, but seeing as how it was row 3, considered them to be pretty decent seats.  We'd be able to see what was going on from the third row.

Turns out there were no seats on the floor for this show, a discovery we made upon entering the venue.  Crap!  Our aged arses were going to have to stake out a spot in the mob. 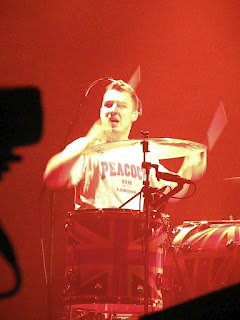 Onward we went.  Oldest people on the floor that night I'm sure, but we staked out a gate spot on the left side of the stage and planted ourselves for the duration.  Kind of glad it worked out the way it did - we were able to experience it in a whole different way.

Arctic Monkeys, the opening band, was spectacular.  I've heard of these guys before, but will definitely be digging into them further.  High energy, great music, and a drummer I immediately fell in love with.  (have I mentioned I love drummers?).  They played an hour long set that displayed their musical prowess, and I enjoyed them immensely.  The front man had great cocky Brit swagger, that you couldn't help but be caught up in.  Would definitely see them if they headlined a show here.

Then the Keys took the stage, and Dan strapped on his guitar, approached the microphone and said "let's get this goin'" cuing Patrick to immediately launch into the drum beat for "Howlin' for You" amidst approving screams of the audience.  With our proximity to the stage, we had a great view of the boys up close and personal.  (Like front row...but better!).  Being this close to the speakers, we not only watched and "heard" the musical goodness pumping off the stage, but were able to "feel" the reverb course through our bodies.  Impossible to not get completely caught up in the music when it's whooshing through all of your senses at such intensity.  (Had a mental image of all that musical sensation mixin' and blendin' with my internal molecules - serious "whoosh" high for the rest of the night!).

One thing you already know going in, but that completely blows you away live is how amazingly talented these two men are.  With only a set of drums and a guitar (they did have a backing band, but sent them away for several songs leaving just Patrick and Dan on stage), they created a sound that had incredible depth considering the lack of additional instrumentation.  For example, their rendition of the aforementioned "Girl is on my Mind" with just the two of them.  While feeling that drum beat and the spontaneous blistering guitar solo, you felt delight in the fact that they turned it into a jam (with 18,000+ people - not your average garage jam) where they were feeling it out rather than playing as written and recorded. They just let that song roll out of them as a psychically linked unit, improvising as they went.  One changed it up and the other was right there with them.  It was fantastic. 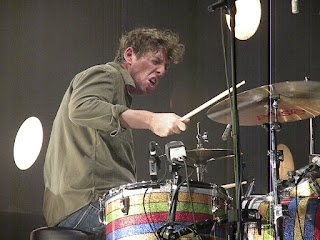 Patrick Carney on the drums is a total machine.  There is a lot of percussion happening in these tunes, and his ability to thrash it out at the level that he does is very cool to watch.  He lost the glasses part way through the second song.  Reached up and took them off, then tossed them behind him.  Who needs to see when you're playing straight from the soul anyway, right? 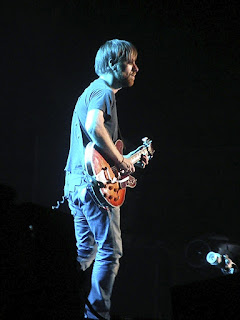 Dan Auerbach on guitar and vocals ripped it up.  Executing blistering guitar solos while belting it out, he had us all enthralled.  He didn't move around a lot as he was tethered to his guitar, and there wasn't a whole lot of banter out of him - he was kind of all business, but he was definitely engaged and into the music.  Transcended words.

I know I've said this before, but it's a real treat to see those musicians that you can tell really, really love what they do.  To witness them cross over into that "zone" when they play...that musical world... and to take us along with them, was pure magic.  The Black Keys have such a great varied sound to them that is kind of hard to pin down.  There are truly soulful moments, with a dash of funk and pinch of jazz.  And there are moments that feel like real old school rock...almost have a Led Zep sound and feel to them.  All these moments make for a fantastic show.  Fave tune of the night had to be "10 cent pistol" that wrapped all their styles into one tasty package and was presented to us in extended freestyle with the boys giving it their all.  "Little Black Submarines" was also amazing - started out with just the two of them, with a complete build up in intensity with the backing band joining them onstage mid way through to bring it home.  Inspired the fully packed ACC crowd to hold up their lighters in old-school, rock and roll approval.

Oh, and our place on the floor at the stage, standing with the mob?  My calves ached like a bitch the next day.  There was a lot of bouncing/dancing in my spot for the duration of the show.  And my arms hurt because I had to raise them above my ears in order to lean them on the top of the gate (yes...I am that short).  And all that "whooshing" made me feel like I'd taken a beating from a rubber mallet. (holy "whoosh" hangover).  But it was totally worth it.  Totally.  Our two nerdy white dudes?:  Transformed into Rock and Roll Gods, right before our eyes.  Make no mistake:  the geek shall inherit the earth.  As it should be.