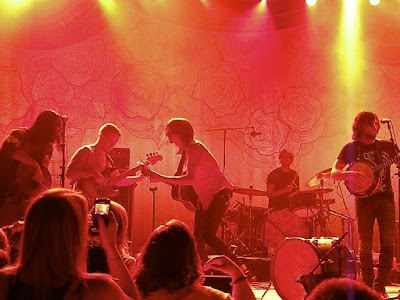 Crawling into work today dead tired after a night out, I met a co-worker in the elevator, and in obligatory elevator conversation, I mentioned that I had gone to see the Avett Brothers last night.  He gave me a funny "who the f**k are they" look and then said "The Avett Brothers... you're getting old", then punched me in the arm and walked away with a superior look on his face before I could respond.

Firstly, I believe he's mixing them up with someone else (the Everly Brothers, likely) and has no idea who they are.  Secondly, he once admitted to attending and really enjoying a Celine Dion concert. 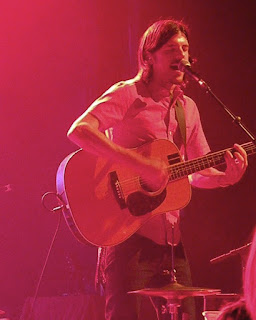 But to the point - if you don't know who the Avett Brothers are (and a lot of people I know don't, which is a tragic), for the love of all that is holy, please go seek them out, because you are out of the loop on a really cool, high energy and creative musical experience.  They blend, in a really interesting way, traditional roots instruments (like the banjo!) with balls out rock and roll.  They take a little bit of bluegrass, a little folk, a little hard edged alternative rock, throw in a plethora of funky instruments, and mix it all up in a pot of awesome sauce. What they do, is true musical innovation that crosses a whole heap of genres, and it works unbelievably well.  And at the heart of that musical creativity, lies the true talent of brothers Scott and Seth Avett.  The boys rock a number of instruments, write incredible music and lyrics, and have clear, strong voices that when slowed down and stripped back, produce the most amazing harmonies (to my co-worker:  kinda like the Everly Brothers, dude, just younger and cooler and current and able to jump around the stage with incredibly high energy without need of a walker...jeez). 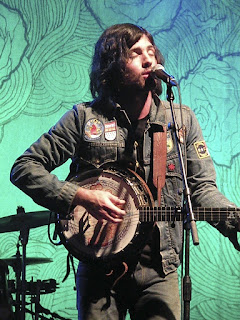 We attended the first of two sold out shows at the Danforth Music Hall on Tuesday night, and had we had the ability to see the future when buying tickets, would have been going again tonight.  They really were THAT good.

With no opening act, they took the stage at around 8:45pm and played a solid two hour set.  They immediately launched into "Laundry Room" with it's beautiful harmonies and call and answer format that kicks into a heel stomping 'whooo hooo-ing' conclusion.  This was the perfect intro to set the tone for the show consisting of energetic jams (I can now claim to have seen a cello player bang his head to rival any metal act, not to mention, a Hendrixesque fall to knees wail on the banjo), offset with quiet acoustic melodies that were so pretty they hurt your heart.

And while musical talent radiates out of Scott and Seth Avett, making them an absolute pleasure to behold, their band was also particularly enjoyable.  Not often is it that your attention is turned from the talented and charismatic front-men to the Cello or Stand-up Bass player, but this turned out to be the case quite often during the show.   It was amazing to watch them go - Joe Kwon on the Cello continued to draw my eye.  You'd think that being tethered to such a massive instrument would keep you somewhat subdued, but not so - The man was jumping around wildly to the music and singing his heart out (no mic), and as mentioned previously, headbanging to the beat - full on joyful possession by the music.

The show had so much variety there was something for everyone within it.   Picking out a favorite was impossible because there were so many different styles to choose from.  Loved that Scott and Seth each took a solo turn for a slowed down folk ballad (Scott performing "Murder in the City" and Seth "Ballad of Love and Hate" - see YouTube links below for our show's performances).  Pure beauty.  Their duet performance of "When I Drink" was just a whole heap of fun.  The full band rocked up jam of "Head full of doubt/Road full of Promise", one of my favorite Avett tunes, showed they can bring a venue to their feet and pump them up to ecstatic heights.  (see link below).  The boys have some rock in their souls for sure.  "Kick Drum Heart" was just the most fun I've ever had at a concert ever, and seeing the entire band on stage having equal amounts of fun performing it added to the über amounts of pleasure.  However, the tunes that made me go back the next day and re-listen because I just had to hear them again (on repeat!) were "Shame", and "Tin Man".  Sometimes hearing songs live gives you a whole new appreciation for the guts of the songs, and this was the case for these two.

I've been pretty vocal about musical preferences, and how I enjoy a wide variety of genres, and yet have a strong dislike for twang.  Generally, the banjo is slotted into this "twang" category but I have to say that I've been converted after seeing this show.  I've never before seen anyone rock the shit out of a banjo, but I now am witness to it's possibility.  It is to the credit of the Avett Brothers creativity that they were able to produce a sound with instruments I would normally shun, that completely pulled me in and turn me around to embrace them.  They can't be pinned down to any one genre, and I absolutely love this about them.

I came out of the show and my cheeks hurt from smiling as "big goofy grin" was my permanent facial expression for the evening.  I think the secret ingredient may just have been the positivity and "goodness" that this band laser beams out to it's fans.  I tend to gravitate towards music that makes me feel, and a lot of the time that involves content that can be sad, or lack positivity, where you can latch onto a big emotional pull and be empathetic to the experience and that is the connection I make to it.  What the Avett Brothers inspire, I find, in their music and in their personalities, is hope.  Even the mournful music they produce has an element of hope to it, and their presence just beams of it.  They seemed to be extremely sincere in the love of what they do, and their appreciation of us for enjoying it.  The evening was a giant love fest between stage and audience (in their goodbye to us, Seth even referred to us as "Sweethearts".  Awwww!).  He was definitely my favorite Avett.

Their Facebook page this morning sent out a picture with a note:  "Oh Canada...we had such a very good time.  Thanks so much for having us."  Scott, Seth and band, no, Thank YOU.  Most fun I've had at a concert in a long time and I so look forward to your return.

Will You Return
The Fall
Down With The Shine
Shame
January Wedding
Paranoia in B Flat Major
Tin Man
Love Like The Movies
Head Full of Doubt/Road Full Of Promise
Murder In The City
I Would Be Sad
Denouncing November Blue (Uneasy Writer)
Ballad of Love and Hate
When I Drink
Just A Closer Walk With Thee
And It Spread
The Traveling Song
At The Beach
Pretty Girl From Cedar Lane
Kick Drum Heart
I and Love and You
Encore:
Living Of Love
Perfect Space
Talk on Indolence


Scott - Murder in the City

Seth - Ballad of Love and Hate