Man, I was not in the frame of mind going in, as I was musically "full up" heading into this show.

We had just taken in The Avett Brothers a few nights prior, and were still in re-live mode in a very big way as it was mindblowingly good.  My brain was unfortunately set to "temporarily closed" to any new music.  Further, I must confess to being a bad Maritime girl.... while I knew of and liked what little I did know of Joel Plaskett, and was aware that he is most definitely a maritime music staple and for good reason, I'd never seen him live and didn't really know a whole lot about him or his music.  What I did know was that he was from "home" and that my maritime compadres, whose musical tastes I trust completely, really love him.  There were a few songs here and there that I had come across and enjoyed, but that was about it.  In truth, my quest to see him stemmed a lot from his appearance in the movie "One Week".  He seemed quirky and talented, which is just how I like my musicians.  It was more personality driven in wanting to see what kind of live show he put on with absolute faith that the music would be good.  So off we went to the Queen Elizabeth Theatre in Toronto to take in the first of his two night stints closing off his tour.

Taking our seats, we noted that there was a "special guest" opener for the evening and proceeded to look him up to see what we were in for (opening bands are always either hit or miss...it's a good night if we can discover someone new).  Frank Turner, was described as a British "folk/punk" musician.  Needless to say, we were intrigued.  What exactly is "folk/punk" anyway, and how does it fit together with Joel Plaskett?  How did these two end up on the same ticket?

As explained to us by promoter Jeff Cohen, who introduced the show, each were looking for someone to tour with.  Cohen, as a huge fan of each of the artists, thought it would be cool to put the two together for Joel's tour.  I bow down to Mr. Cohen for his brilliant marriage of these two artists, without which, I would likely have never known who Frank Turner ever was.  (and that, my friends, would be a travesty).

I'll be reviewing this show in two parts, because unlike a lot of my past show blogs, I've got a whole lot to say about the opening act.  So without further ado.... 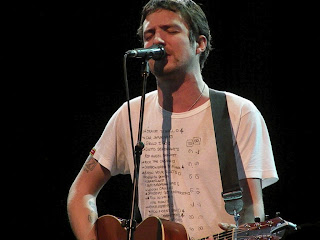 Now as mentioned, I had never heard of this man before looking at his name on my ticket about 10 minutes before show time.  But from what I gathered in my short presence in his stratosphere, I believe that he can be described in one word:  Authentic.

Truth be told, I was smitten with him right off the bat.  (he's only 30, so not (ahem), in a "cougar-y" way, just in an admiring, "I really dig what you do" way).  I'm a total sucker for a man with dimples, a Brit accent, and lets face it, any man that has anything to do with good music, so put these attributes together, and I couldn't help but be completely charmed. (so maybe just a wee bit cougar-y...)  I had entered the theatre not "all in" for this show, but by the time he finished his set, I was wide awake and raring to go, synapses firing, messaging my music buddies during the break wondering if they had ever heard of him.  (and they had.... way to bogart the Frank Turner, guys, jeez!)

His style was completely raw and unpolished, in the best possible sense, and with huge amounts of heart.  I fully believe that he talked and played from the stage as he would if he were sitting around with his friends, which contributed to the "real" feel of his show (and that for that night it really felt like we *were* his mates).

Even with just a guitar for accompaniment, he was able to fill the entire theatre with his exuberance.  High tempo strums combined with intricate finger picking were enhanced with his awesome forceful vocal delivery and crowd motivating lyrical content.  He was a big fan of crowd participation, and drew everyone in to several sing-a-longs.  And he had his own following - people who were there just to see him and knew every word to every tune and bellowed along with him.  (as a note, I'll be among that lot the next time he graces Toronto).

I've since downloaded his albums and am enjoying the re-live of what he performed for us live - total ear worm goodness.  Favorites at the moment are "Long Live the Queen", which I mentioned to a co-worker I want played at my death party (I don't want a funeral...just a party...bring my urn!) Her reply to this statement was "think kind of highly of yourself to have a song with the lyrics "the Queen is Dead" featured so prominently don't you?"...to which I replied "I'll be dead, can't you humor me this once?".  Aside from the aforementioned banter, it's a great tune. Also love "Substitute", my new personal anthem. The entire album is mint actually, but really, can anyone be surprised that I would connect so strongly with an album titled "Love, Ire & Song"?  "I Still Believe" and "If Ever I Stray" off the album "England Keep My Bones" are also in heavy rotation.  It's all yummy good really, and how can one NOT fall instantly in musical love with a man who claims that Gene Simmons is "a giant anus" for documenting his female conquests and being compelled enough in this belief to write a song about it?  (see set list below).

I'm now also a fan of the folk punk genre and plan to dive into it a little further.  Little less angry than classic punk.  But a lot of the same sensibilities and ideals as far as non-conformity.  It had the characteristic repetitive guitar riffs, but also contained a good deal of really great melody throughout to grab you and hook you in.  There are some truly poetic lyrics, interchanged with some rousing, fist pumping anthemic belt out choruses that take over your brain for days having listened to them.  (Have been sitting in meetings this week shouting (in my head of course), "I won't sit down.  I won't shut up.  But Most of all, I will not grow up!" and it's making me grin wide to the point where I'm constantly asked why I'm smiling).  Punk, folk, rock.....regardless of what genre he is dropped into, as bellowed out by Frank before our last great sing-a-long to "Photosynthesis", it's all rock and roll, and:  "Rock and roll is about one really simple fucking thing.  It's about a room full of people who are friends and who are equals, who came together without a barrier between them.  To sing.  To Dance. To Drink.  And to have a GOOD fucking time!  That's why we're here.  THAT's what rock and roll is all about". 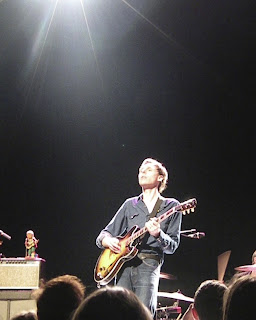 Now one may think that having been soooo taken with the opening act, that it would negatively affect my enjoyment of the main event.  Not so.  Frank just got me warmed up and ready to receive, with every musical pore in my body on high alert and ready to absorb.

As expected, Joel Plaskett and his band, were all kinds of über goodness.  His show was one big, feel good jam that had the entire audience on their feet dancing for the duration.  In a theatre show with assigned seating, it's quite a feat to immediately get everyone standing, and have the crowd flow into the aisles and to the space in front of the stage to dance along.  Way to go Joel Plaskett - you turned the Queen Elizabeth Theatre into a kick ass party complete with a wicked soundtrack!

The music was a mix of acoustic vs. classic rock and roll tunes.  I loved this - I went in expecting a lot of singer/songwriter type acoustic fare (and wasn't disappointed - there were some wonderful stripped down tunes included in the set list).   Yet Joel and his band rocked the house for a good portion of the show, wailing away on their instruments in true rock show fashion and producing some high energy, top notch music.

He was the most interesting man to watch - he is all tall lankiness, and when he moves, it is with a cool flowy smoothness.  His stage presence kind of reminded me of Tom Petty, in that it was so easy and relaxed, but radiating "cool" (If you've been to a Tom Petty show, you know what I mean).  When he spoke, it wasn't in a hollery way - it was upbeat, but in conversational tones.  Comfortable in his skin.  In his element on the stage.  A highly skilled musician.  Charismatic and real.

The quirkiness I was looking for was evident as well.  There were several lengthy chatty moments that filled me with delight - explanations of their various tour vehicles over the last decade and a half that were extremely amusing detailing the sleeping arrangements in each (i.e., each bunk had a name, and one bunk was referred to as the shits....nobody wanted to sleep there, 'cause "it was the shits"), how he came to have two dancing monkeys mounted on a bench attached to a foot pedal (dancing monkeys are always funny), and the story behind "Love This Town" that extended into a good 10+ minutes in the middle of the song (to the continuous strum the guitar of course - "if they treat you wrong, get them back every night in song").  Wonderfully entertaining.  I love musicians with personality that let us into their lives a little.  These entertaining little stream of consciousness segue ways always make me extremely happy at a live show - they are the three dimensional bits that you can't get from sitting at home and listening to an album.

Two very different artists I was baptised to this night - so very different in their styles, yet similar in a lot of ways.  Both highly talented musicians.  Both passionate about their music.  Both highly into interacting with their audience.  Both on my list of must sees going forward.  Fantastic night of music all round.

I Knew Prufrock Before He Got Famous
Try This at Home
Peggy Sang the Blues
Wessex Boy
I Am Disappeared
Substitute
New and still untitled song
Long Live the Queen
If Ever I Stray
Wherefore Art Thou, Gene Simmons?
English Curse
I Still Believe
The Road
Photosynthesis

Tough Love
Waiting to Be Discovered
Deny, Deny, Deny
You're Mine
Heartless, Heartless, Heartless
North Star
You Let Me Down
Harbour Boys
Beyond, Beyond, Beyond
Love This Town
Face of the Earth
Nowhere With You
Lightning Bolt
"Work Out Fine" with interlude medley featuring Lee Dorsey's "Rain Rain (Go Away)," April Wine's "Oowatanite," The Rivieras' "California Sun," Manfred Mann's "Doo Wah Diddy," Sam Cooke's "Cupid" and Eagles' "New York Minute"
Through and Through and Through
"Maybe We Should Just Go Home" with interlude medley featuring Bo Diddley's "Who Do You Love?"
Extraordinary
Encore:
I'm Yours
Rollin', Rollin', Rollin'
Come On, Teacher
Posted by L.C. at 12:41 PM