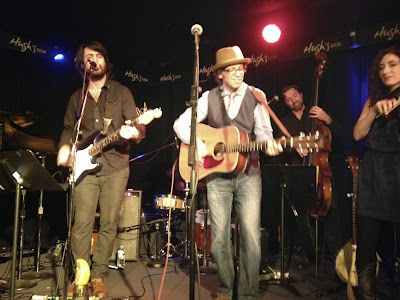 Have been busy and distracted (read: lazy) lately, so I'm several blog posts behind on shows.  And I'm happy to say that this show has inspired me to get caught up in a way that others I've attended have not (yet).  Jory's intense love of what he does tends to wrap you up in gratitude for the existence of quality music as he beams that love out to his audience... and that supremely good feeling of a big musical bear hug makes a girl want to share! (awww, musical love is awesome, isn't it?)  So this post will leapfrog over two others I still haven't tackled yet but will get to shortly.

We missed Jory's annual show at Hugh's Room last year, which was a damned shame.  But happy to be back we took our reserved seats that were within arms length of the stage.  This was going to be an up close and personal show!  And as a special treat, Jory had a full band with him for this one.  David Celia on guitar (ummm, Hellooooo David Celia, have already grabbed a couple of your albums), Rosalyn Dennett on Violin and banjo, Maury Lafoy on Bass, Mark Mariash on drums and the delightfully entertaining David Matheson on Piano.  It was a great line-up of fantastic musicians and while I always love Jory solo, it was a perfect enhancement to his show.

What can I say about a Jory Nash show that I haven't already said very emphatically here and here?  Well...to reaffirm:  he continues to be real in the best possible sense.  His beautiful rich vocals and lyrics continue to move me to my core.  And he continues to put himself out into the musical universe with raw honesty and as a natural talent fuelled giver.  It's a warm musical experience.  A soul filling comfort.  A Jory Nash show never lets you down.  And there is a "one-ness" with the people attending that is unlike any other show - always a total love-fest with the friendliest of people in the best possible atmosphere.

He had a wonderfully diverse mix of tunes to play for us.  (See set list below).  Some new, some old, some covers, some traditional.  Offset by a full band, tunes like "Helicopters Circling" and "A Kiss for the Great Unknown" were mint!  And as per usual, Jory took to the piano for a couple of tunes.  When I think of Jory Nash the musician, I always picture him with a guitar, however, tunes like "Sally" and "The Nighthawk" made me stop and realize that when it comes to a good piano ballad, his wonderful piano melodies need full recognition! 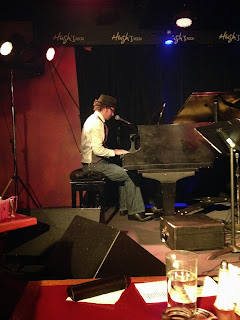 We were fortunate enough to get a few brand new, yet to be recorded tunes, and as Jory explained, they were inspired by his summer "Torrential" romance (and with his classic good natured but comical straight man delivery, added that whenever you describe something as "Torrential" it is usually after it's over).  Enjoyable set-up to the new tune "When the Knives Come Out" and reminded me of a Joel Plaskett quote "If they do you wrong, get them back every night in song".  (as a related aside Jory, have I got a song idea for you!  It involves a relationship with way too much beer and bacon, a crazy stalker ex, embracing one's inner redneck, and getting dumped by e-mail.  I'm pretty sure it needs to involve a banjo.  We should talk....)

Throughout the night, he stepped back and allowed his musicians to take turns fronting - Rosalyn Dennett performed solo on the violin, and David Celia stepped in to do one of his songs (as mentioned previously, really enjoyed him.  Do check him out.)  Jory and David Matheson gave us a teaser to the Sounds of the 70s show they have scheduled at Hugh's Room in March (we are sooooo in for this one!), and we were also delighted with a first for a Jory Nash show that "I" have personally witnessed - a full costume change!  (complete with new hat, vest, tie, and belt...but I was wishing I'd gotten a photo of the costume number one belt buckle with the great big "J" embossed on it - it was awesome!) 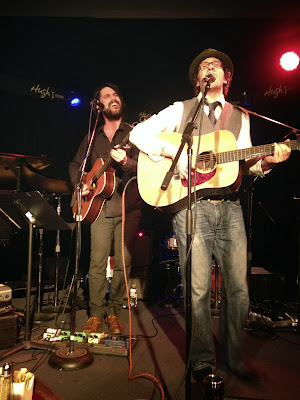 Was incredibly pleased also to get one of my favourite go-to feel good songs off his Folk Jazz Blues & Soul album in the encore -  "Everything Feels Right".  Impossible not to nod your head like a Muppet when this one is playing which makes you smile goofily (and really, who doesn't want to hear a tune that makes them do that?).  The lyrics to this one are clever and fun.  Was happy to have heard it played live.

I think this tune, and the performance of "The Enemy" were the highlights for me, but really, it was all pure goodness, so hard to single anything out with great conviction.

As per usual, left the show feeling warm and happy.  Simply put, a Jory Nash show feels like home....and it's always a wonderful feeling to be home.  Fantastic night.  Fantastic show.  Thanks to Jory and band.

If you're looking to catch a Jory show, or want to grab some Jory tunes, check out his webpage here:  Jory Nash's Website .