So December 3, 2013 was date night with my boyfriend.  (ok, so he's not *really* my boyfriend, but Frank Turner became my official "Substitute for Love" since I first encountered him as the opening act for Joel Plaskett in May of 2012 (read about my intro to Frank here).  We DO have a relationship...you know... through his music... he just doesn't happen to be aware of it is all.  It's all cool and not restraining order worthy, I swear!)  I've been following his music since that show, and have eagerly grabbed up every album put out.  He holds a place in my "Music as Religion Holy Four" (along with Glen Hansard, Matthew Good and Dave Grohl).

His album Tape Deck Heart came out in April of 2013 and I bought it release day and formed a special bond with it.  This album, is without a doubt, a break up album of epic greatness.  Regardless of my personal mood or current circumstance, I tend to gravitate towards albums that possess lyrics and tone that are created as a result of some sort of intense feeling, as I'm able to form a real emotional connection with the songs that way.  It became infinitely more meaningful to me months later, as it was the soundtrack for my own personal breakup.  I definitely found some solace, camaraderie and catharsis by listening to it, and THAT, right there, is one of the many reasons that I love music so very very much.  Frank, as any good (boy)friend would, was there to successfully sing me right out of my funk.  He's the bestest!

When his tour through Toronto was announced, it was a no brainer that we'd be attending his stop at Sound Academy.  Not a huge fan of the mosh pit, we were able to acquire VIP balcony tickets and have now been officially spoiled.  Can't see ever attending a show there and not going VIP.  Separate entrance.  Separate bar.  Separate bathrooms.  Separate water view outdoor deck.  Seats.  Balcony view of stage. (spoiled I tell you!  I felt so swanky and superior!)  The convenience of the bar made for a few more beers than I'd normally consume at a concert, but it was all good and all fun.

He had two openers for this show.  Billy the Kid was up first.  Was just her and her guitar - she was pretty good.  July Talk were next and were an interesting sound.  Alternative vibe, with a guy and a girl fronting with a white hot sexuality coursing between them, so tangible you felt like you could reach out and touch it.  Got the crowd riled up pretty successfully.  Would see them again.

Then Frank came on starting the night off with "Photosynthesis", one of my very favorite tunes of his, with its unique fusion of punk attitude with folk sensibility and rocked up roots instruments.  It set the tone for the night as an über high energy ride for the duration.

A Frank Turner show (this is our third) is ALWAYS high energy.  Frank confessed to being under Doctor's orders to take it easy due to a back injury, but that didn't stop him from bouncing around like a hopped up Tigger (see cover photo above... ).  The only concession he did make for his back injury was to not play guitar for this show (save for one tune in the encore), but without the guitar strapped on to ground him, he was all over the place, running, jumping, crowd surfing and flying across the stage.  Watching his completely untethered acrobatics contributed to the enjoyable energy created.

As per usual, Frank is all about crowd interaction.  He bantered with the crowd a bit and explained to us that he had learned a few things about the city ahead of this show.  Yonge street being the longest street in the world.  Casa Loma's 'only real castle in North America' distinction, (and showing his inner history nerd questioning whether it could be considered a "real castle" having never been a defensive structure).  And of course, he knew all about our douche bag Mayor where he expressed confusion on whether our system was just messed up and we couldn't oust him, or if we were just "bad ass motherfuckers that don't care" about having a crack smoking mayor.  See vid below for his "all about Toronto" chat. 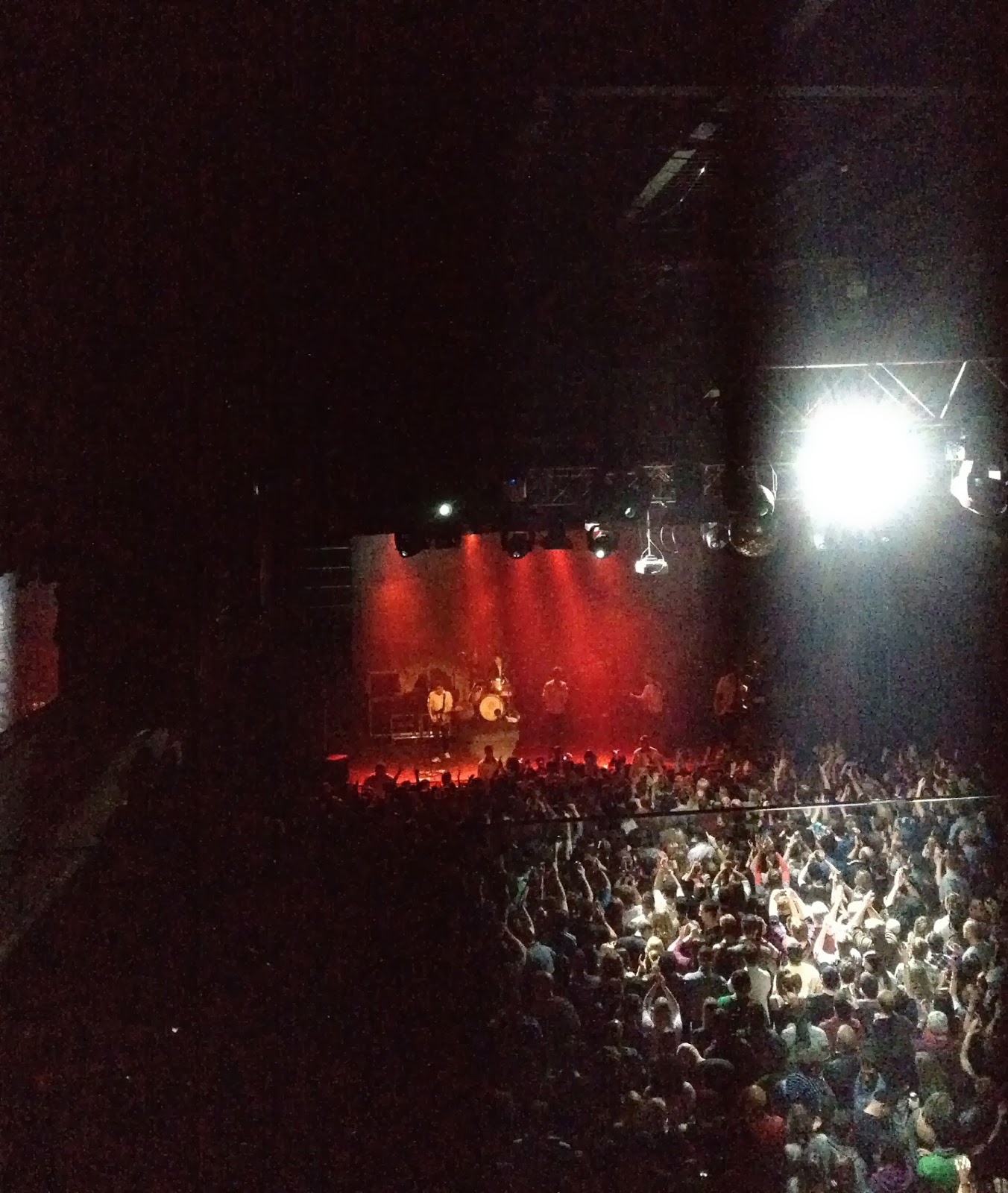 In addition to the visually awesome kick we got from his stage show, more importantly, the music itself was completely mint.  The set list offered a heap of Frank Turner fan favorites and a few rare gems that were great to hear live.  As mentioned, he kicked off the night in high gear with "Photosynthesis" and kept things going with one of my favorite tunes off the new album, "Plain Sailing Weather" with its aggressively self punishing lyrical content.  Favorite moment had to be the back to back one two punch of "The Road" followed by "If Ever I Stray" as it launched the crowd into hand clapping, fist pumping, party mode solidarity.  And of course, "Long Live the Queen" as a Frank Turner show staple, with its high tempo, speed lyric story of loss and celebration of life, didn't disappoint.  (Frank must have some wicked breath control to be able to pull that one off live so flawlessly).  I'd have really loved to have heard "Fisher King Blues", my current fave off Tape Deck Heart.  It would have been amazing to be able to "feel" this tune in the live setting with it's poetic lyrics and wonderfully melodic, layered instrument and vocal build.  But was pleased to get "Broken Piano" as a mournful, heart beat like percussion close-out to his set prior to the encore.  The brilliant, deliberately slow building construction of both these songs speaks to me musically on the album versions, so was glad to get one of them live at least.

Was a fantastic ride of a show, closing off the encore with "Four Simple Words" with it's cabaret style book ends fusing into full out punk rock juicy centre, complete with the beefy security guards at front of stage swaying along to the slowed down portions.  Great ending, leaving the audience in a state of feel good happiness.

I adore Frank's tall, lanky, cool nerdiness (if you follow this blog at all, you'll see that particular pattern of affection I have for the "geek cool" trait - it is the highest order of compliment I could give when describing someone I admire).  There's something incredibly attractive to me about musicians who are intelligent enough to be informed and well spoken, comfortable enough in their own skin to embrace their personal quirkiness with confidence, but laid back enough to not be obnoxious about it.  That, in my humble opinion, is what "cool" is all about.  Frank fills all these marks and puts out a brand of music that pulls me in and keeps me content with what it says and how it makes me feel.

Best boyfriend ever.  So much fun.  Come back again soon Frank!

Set List:
Photosynthesis
Plain Sailing Weather
Peggy Sang the Blues
Losing Days
Try This at Home
Glory Hallelujah
Reasons Not to Be an Idiot
The Way I Tend to Be
Wessex Boy
The Ballad of Me and My Friends
Oh Brother
I Am Disappeared
The Road
If Ever I Stray
I new Prufrock Before He Got Famous
One Foot Before the Other
Long Live the Queen
Recovery
Broken Piano