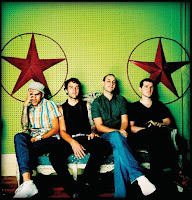 I have a couple of preambles before I review this band, so bear with me, because it IS relevant to their review (I promise!  No skipping or skimming!  There may be a quiz!)

Unrelated, but relevant preamble Number 1:
Back in University (many, many moons ago), I took a Psychology course in Visual and Auditory perception. One of the theories we studied involved the brain going through a mental Rolodex of templates, analyzing for a match, and then clicking when the match has been made sending a recognition acknowledgement to the visual/auditory receptors. For example, when you hear someone talking in your native language, but with a very thick accent...at first it doesn't click what the person is saying to you, but once the brain scans through and matches to it, you have no problem understanding it word for word, the brain just needs to assimilate the accent to the language template and then it "gets" it and your problems in hearing the message conveyed vaporize. Always liked this particular theory...it seemed very plausible to me and fit my life experience.  Often apply it to music, and in so doing, always give something new at least 3 good attentive listens before I make a judgement call on it in case it just hadn't clicked onto my "good music" template on the first pass.  My theory is, true creativity, by definition, is different from what you've ever heard before, so it's possible the brain needs to churn for a bit to grab onto it.

Unrelated but relevant preamble Number 2:
Very recently, one of my music chat acquaintances (we'll call him Snuffaluffagus, or "Snuffy" for short) and I were having a conversation about a music recommendation I had made to him....Snuffy listened to it once, and didn't particularly like it. Said that while he liked the artist in question, this particular album didn't "attach to the magical receptors in the brain" on first listen, that he wouldn't be "throwing it in his car stereo any time soon", so he gave the disc away to a neighbor (gasp!).  Snuffy wasn't amused when I asked him if he was awake (or pissed off at me) when he listened to it and we had the music is subjective, etc., back and forth.  You see....it was one of my favorite musicians of all time, so it ate at me, enough to harass Snuffy to give it a second, and if necessary, a third listen because *perhaps* it just hadn't clicked on first listen to the "recognition of a work of art" template in his brain.  (this album IS a work of art that is probably not appreciated by most....it isn't a car stereo album, it's an "enter the dark innermost fears and perceived failures by abstract in the artist's mind" album....once you assimilate to THAT template, it should change your opinion of it...but I won't go into an in depth description of my love for it here (sent off a very looooong e-mail to Snuffy on that topic already), because that isn't the purpose of this particular blog post, so on with my point...Brand New is the topic of conversation here, so back to them).  I mention this story, because I feel strongly that it isn't always about what instantly attaches to those magic receptors, and sometimes, you need to allow for a template match, or to even be patient and open enough to allow the brain to create a new template, especially when it comes to something creative like music.

Brand New
Brand New was one of my 13 band recommendations mentioned in blog post number 1.  It is one of the favorite bands of the friend who made the recommendations to me, and on first listen, I have to say, I didn't get it.  There was no initial "attach to the magical receptors"....I didn't dislike it, and I could see the appeal, but it didn't strike me... you know?

Then I listened again.  Upon second listen, I started to pick up on the lyrical content, some of the musical innovation, and the progression of the band as they grew from album to album.  By third listen, I'm stopping what I'm doing because a particular lyric in a song is striking me as fucking brilliant and I'm rewinding it because I need to hear it again.  By fourth listen, I'm in.  I'm feeling the passion behind the musical choices in certain songs, the arrangement of the vocals and their ever changing intensity, and it's all very pleasurable to my senses.  I'm putting certain songs on repeat to analyze and appreciate the artistry.  And with all art, even though it's completely subjective and people will react to it differently, sometimes it's much the same as how you would assess visual art, where you have to step back, then closer, then walk around it, then tilt your head a little to gain a different perspective, before the light bulb goes on and the template fits and you have your "aha!" moment where you've grasped onto it and appreciate it and say "Yes!, yes, I like this!".  Well this is how I became a fan of Brand New.  Sometimes you just have to digest and let it speak to you.  Open the mind and allow it to do it's thing.  And there are times that impatience or other things on the brain, cause you to miss out on things that are worthy of the extra attention as the taste for them needs to be acquired.  We've become a society of greedy consumers of art folks....I'm a guilty party, I'll admit....I like my instant gratification too, but I'm so glad I didn't immediately dismiss on this one.

Of the four albums I dove into, I liked all of them, for very different reasons.  Your Favorite Weapon (release date: October 9, 2001), is a good, solid album in the pop-punk genre, but definitely my least favorite of the bunch.  While it's unfair to assess it against the ones that follow, it's almost impossible for me not to do so here because the band matures so much in future offerings.  Great first album...but they just get better going forward.  Now THIS is a car stereo album...they are telling us a story within the songs, but it's not as deep...less life experience driven.

For Deja Entendu (release date: June 17, 2003)  I was told it was a "landmark album for the genre", and I couldn't agree more.  Took the pop/punk feel of Your Favorite Weapon and built on it.  You can feel the maturation from the first album.  The lyrics are more meaningful and the music itself is expanding out of the boundaries of the genre.  The lyrics on this album blew me away - took the time to even write some of them down I liked them so much.  "I Will Play My Game Beneath the Spin Light", in particular, had so many lyrical gems I can't pick just one to include here as an example, and "the Quiet Things that No One Knows" is just such an enjoyably well crafted song in all respects that my ipod hit count for it has landed it in my top 50 in a music library that numbers several thousand songs.

The Devil and God Are Raging Inside Me - (release date:  November 20, 2006) is a much quieter album.  A bit more melodic than it's predecessors, but you can hear them toying with some experimentation with their sound.  Just a slight flirting really...a sign of things to come on Daisy.  Great album start to finish and may just end up on my top 10 Desert Island must haves.  Stand out tunes...Jesus Christ is an absolute favorite...lyrics to make you stop dead and pay strict attention.  While its (for lack of a better description) more mellow feel may make you think it's something you can listen to in the background while doing something else, you'd be wrong....you'd be missing out on all the content.  The bursts of brilliance are subtle, making it all the more clever in my mind.

Daisy (release date:  September 22, 2009)
When the band was originally recommended to me, I was told I should listen to the albums chronologically to see the progression of the band.  Being the rebel I am, I started with this one, their latest.  (Actually, I wasn't sure which one came first when I cued them up on my ipod on the bus, and this one happened to be first on the list being alphabetical...so more orderly than rebellious, but that's our secret 'kay?!  Between you, me....and the rest of the world wide web!).  Started with an initial old gospel type drop in opener (this soft little ditty bookends the album songs), and launches immediately into the first BN song.  I experienced this, while I was standing on the bus, inadvertantly shoved up against someone lumpy in all the wrong places and smelling vaguely of old curry, as the gospel number immediately segued into Jesse Lacey sing-screaming at me right off the bat during Vices.  Lets just say I wasn't in the most conducive environment to be receptive to it.  Further listens (as described above) and I was able to assimilate and enjoy.  I was able to find the melody, enjoy the bass line, the guitar work and the very cool drum beats, and "get" the song.  The album tends to be a hills and valleys type project - no way are you going to be permitted to sit back and relax and let it fade into the background...it wants your attention, and it's going to get in your face if it feels you pulling away.

It's a bit of an abstract album as well.  Lots of sound experimentation and they drop different items in randomly (like the bookending gospel tune).  While I didn't care for  "Be Gone" with it's out of focus lyrical track, I can appreciate the experimentation.  They are definitely giving us a buffet of different morsels to gnaw on here.

Stand out Tunes:  Sink (Shears a layer of skin off me every time I listen to it....musical exfoliation rocks!) and I really like Noro with it's whispery vocals and rhythmic arrangement.  I find in this one (and most of the songs on this album actually), every instrument is standing out - nothing is fading into the background of a song and all the band members are equally prominent.  And the title track, "Daisy", with it's brilliantly beautifully poetic lyrics of self doubt and the instrumentation that builds from soft guitar picks to the striking riffs to full on band harmonies.  If you can't appreciate the story being constructed within, I don't know what to tell you....it's vulnerability set to song...I like my musicians human and this is as stripped down human as you can get.  Also a perfect example of the evolution of the band....compare this one to, say, Seventy times 7 off the first album with it's bratty, giving you the finger, attitude....the boys have grown up and while their younger selves were enjoyable to listen to, I much prefer the adult conversation I'm having with them in their later fare.

So folks, there you have it.  I'm all in!  Give them a listen!  Be forwarned...they aren't for the faint of heart....open your mind and let that template rolodex get rolling!

The Quiet Things That No One Ever Knows

Labels: Brand New, Daisy, Deja Entendu, My Favorite Weapon, The Devil and God are Raging Inside Me