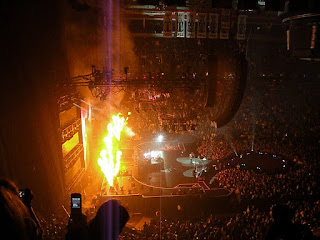 So a couple of posts back, I compared my music intake to food....some that offered life sustaining nutrition, and then there were the guilty pleasure foods....the ones I knew weren't good, that I wasn't fooled by, but that regardless of their nutritional value (or lack thereof), I would consume and take some enjoyment from anyway...keep THAT in mind and please don't write off my musical credibility here, because I fear that this post, for this particular show, this early in my new blog, could conceivably shoot it all to hell. Give me the benefit of the doubt even if you dismiss this one...please?

So here's the story.

I am the instigator a great deal of the time in attending concerts with Jakki, my music buddy partner in crime. It's safe to say that she attends a great deal of shows she may not have really chosen to if I hadn't made the request. Not to say she doesn't enjoy the shows, or that we aren't on the same page a good deal of the time in loving certain artists, or that she hasn't introduced me to some kick ass stuff I wasn't aware of prior ('cause she does, we are, and she has), but there have been some concerts that I say "by the way...we're going to this..here's a few discs...listen to 'em to prepare", and she's all over it. Best music buddy ever and she usually ends up liking whatever I've dragged her to, but the point is, she is always game.

So back in December one day, she pops over to my desk and tells me that Breaking Benjamin, a band she likes, is playing in Toronto and she'd like to see them. Glad to accomodate, no questions asked, I log into ticketmaster to acquire us some tickets, and discover that the show in question is Breaking Benjamin... opening for Nickelback. Neither of us can stop laughing at this point...the two of us are in fits of giggles. Did a quick "Music Gods Forgive us" and secured us some tickets. From December on, whenever we mention the shows we have in the lineup, we almost mumble this one to people, or just say "Breaking Benjamin". It's really taboo to even speak the name!

I've noticed an interesting phenomenon whenever Nickelback comes up in conversation. Nobody will admit to liking them....it's extremely uncool, in fact, and you will be subjected to some serious ribbing. An acquaintance of mine once confessed that he enjoyed them to a group of friends, and was greeted with the counter attack of "How in the reign of F&*k...(complete tirade omitted, but it was guffaw inspiring, ending with)...Have you been drinking???". Seems to be the general consensus. I don't get the ferociousness of the backlash really. Yes, they are generic. Yes, the music is disposable, but all in all, are they really that bad? I find that Canada tends to be fairly snobby when it comes to it's own musicians...if they didn't sweat blood and pay their dues by crawling their way out of the ashes for years and years, commercial success is really frowned upon. Canadian's want to see their artists toil! Nickelback, no matter how "unpopular" or "unoriginal", have achieved commercial success relatively quickly. A good point was raised by Mandy, another music buddy, who said that we should embrace bands like Nickelback because their commercial success with major labels here in Canada provides cash flow, and in effect allows the labels to take on smaller bands who actually have a unique talent but have yet to gain a following. So, on that logic, we are just doing our part in support of Canadian talent folks! (Okay....justification for going done. It is what it is, so on with the show. Jakki, myself, and Tracy headed off to the ACC...) 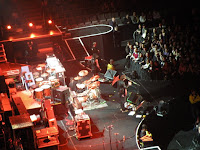 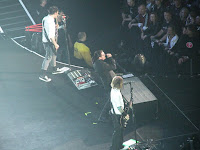 Shinedown. ah...tried a bit too hard. I always feel sorry for the opening bands at big shows. They were asking the audience to get up and "jump" on command....the audience was having none of it. Realized during their last song that "hey...I've heard these guys!". One of their singles was playing in heavy radio rotation for a while last summer. Name escapes me, and I guess I don't really care enough to go look it up. Was a catchy tune. That's about it. 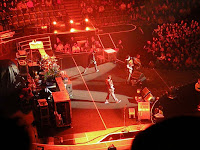 Breaking Benjamin. They were quite good, I thought. But their time was quick. Each opening band only got a few songs really. Would have been interested in seeing a bit more of them. They knew their place, played their set and exited. I do own some of their stuff, so I'm already familiar with them.

Sound for all 3 openers was not the greatest - the bass was so pumped up I could feel it running through me (and not in a good, meld with the music while it courses through you way), and the vocals were muffled. I'm no stranger to a rock show, so when I say it was "very loud", I don't mean it in a "turn that rock music down young man" old lady kinda way, I mean it in the way that their sound guys didn't have the mix right and it was just booming bass.

Out of nowhere and without any kind of warning (i.e., lights going down, interim music stopping), a big BOOM sounded and scared the shit out of me. Then the fire errupted. I swear, it felt like my eyebrows were singed clean off and I was sure I'd go home with a sunburn. I've never seen so much pyro....and I've been to a live Motley Crue show! Nickelback had taken the stage. 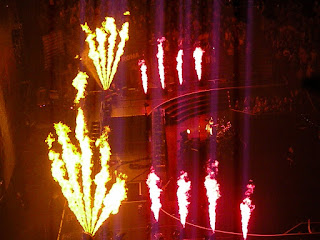 Nickelback knows their audience well and they played (and provided commentary) FOR said audience. Much talk of drugs (we got really high...and then I wrote this song...cue guitar). I'm sure I got contact high from the second hand weed... you know when Chad comments that he can smell it from the stage amidst the pyro odor, that there was a lot of it going around. And there was audience drama (the drunken "cougars" in front of us got into an altercation with a younger girl and her boyfriend that was a bit distracting, all while embarrassing the shit out of the 13ish year old son of one of them). 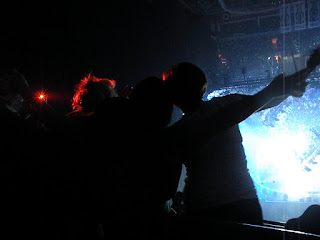 They played all the "hits" to an audience of 20+ thousand (give or take) that ate it up. They worked the stage really well. Chad was a talker and adopted the "stance" in various positions from the stage (you know the one....legs spread, pelvis pointed to the audience like a blinking arrow). 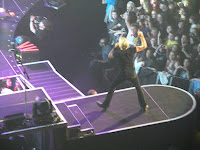 It amused me to a certain extent because I had a momentary flash of Jason Lee's character in "Almost Famous" where he says "I look for the one person in the audience who ISN'T getting off....and I GET them off! THAT you can print!". Gave me the giggles a bit, but gives you the sense of my mindset...for a show I'm extremely into, my mind doesn't wander and I'm at one with the band. Here, I'm thinking about movie quotes. They played the main stage, then headed out into the catwalk end of the stage and played there. Had some audience interaction (there was a 10 year old on the floor with his Dad literally pressed up against the gate that Chad kept coming back to to chat with. Cute, but...my inner Mom was cringing on the parenting choice to bring a 10 year old and put him in THAT spot where as an adult, you take your chances on bodily harm). Then they had an "intermission" of sorts where they shot things into the audience and literally THREW cups of beer to the fans. Bottom line, they were there to put on a show, a reaaaaaaly big sheeeeew, and entertain...and I believe they succeeded in their mission, minus moving the audience emotionally with their music. 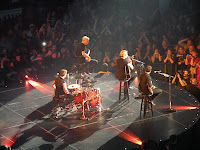 Here's the thing with the band.... they played extremely well, and Chad has a great voice there's no denying (I don't care how much you hate Nickelback...he does have a great voice.) The music sounded pretty flawless live (better sound team, I'd say), and they are all technically proficient musicians. But for every song I'd think "oh, this is the one I know...ah, nope, not it". "oh, this one...nope" And then again. And again. Really got a sense of how their songs are interchangeable as the majority of them sound exactly the same, but with different lyrics dropped in. But I'm thinking perhaps I was in the minority, as the cougars in front of us (and the rest of the audience come to think of it), sang along with every word, so clearly, they could tell the difference.

I don't fault the band. I can see where the Nickelback haters are coming from for sure, mind you. But they have a formula, and it works for them...they filled (and pleased) the Air Canada Center so I'd say they're doing alright for themselves. While I'd be interested in seeing what they could do with a show where the theatrics are cut away (less fire, more substance), and they maybe tried an acoustic set to make a connection with their audience, lyrically and with a sincere meaning behind their music, they are what they are and they've found their niche...if it ain't broke, don't fix it. This mentality may offend serious music fans, but really, why should it matter to them? Why waste time criticizing. Live and let live.

Fav part of the show? The drum solo. Now that was a thing of beauty to watch. For those several minutes, everything else was blocked out for me and all was right. 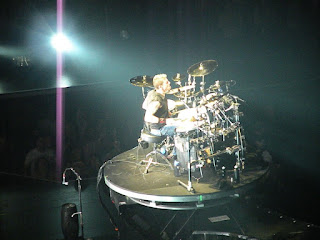 Did I enjoy the show? Hell yeah, with a qualification. In a way you enjoy jelly beans and squeeze cheeze. Very little value, nutrionally, to either of these guilty synthetic pleasures, but you eat them and enjoy them. These are "food" items you'd never want to over-indulge on because there is nothing organic about them, and they tend to give you an unpleasant sugar rush/aftertaste. The initial rush always is followed by your body craving something with a little more substance.

Thanks Nickelback, I was entertained.
Devil horns (or "ears" right Trace?) raised.
Posted by L.C. at 8:51 AM