He's a tough sell really. He has no defined musical genre and is something of a chameleon musically, so you either "get" him, or you don't. A lot of his stuff I REALLY dig, and some of it I don't at all, but his live show, regardless of musical taste, is an experience. I'd had a conversation with an acquaintance where I was asked to describe what kind of music it was prior to the show we attended back in December 2008 that went something like this:

Him: "Hawksley Workman? Never heard of him. What kind of music is that?"
Me: (puzzled, and speechless, which is quite a feat)..ah, Hmmm.
Him (clearly jumping to conclusions from the name): Is it classic rock? Country? Rockabilly?
Me: Sort of..., no... , (laughing and wondering if I look like someone who would go to a "rockabilly show")..NO!

The truth is, you never know what he's going to come up with and he is an extremely prolific singer song writer, who has been around for a very long time (mentioned that he and his keyboardist had just recently played their 700th show together). He has a large catalogue of albums, and has released two albums this year alone, one in the rock vein called "Meat", and one soon to be released in full (but is being released song by song in digital form since the beginning of the year) called "Milk", that has somewhat of a (shudder) electronic dance vibe to it. My favorite all time record of his is "Between the Beautifuls" released in 2008 that has a soulful, singer songwriter vibe to it, and is one of my no brainer desert island selections...could listen to it start to finish over and over never tiring of it. Makes my entire being feel good.

(Seriously...how do people who don't self calm with music function?...ok, digressing).

He writes what he feels. He has a thought, (even something random or mundane), and a song emerges and that is how he works, often producing songs for an entire album in a single week. He doesn't overthink it, or tweak it, he just lets it flow out of him. (so I guess sometimes, he feels like dancin'!) Point being, I feel he is a true artist that just lets himself be the instrument of the song being created and doesn't concern himself with boundaries of genre. I like that and regardless of whether or not I subscribe to the art being produced every time, I appreciate his creativity. Will always see him when he rolls through town... 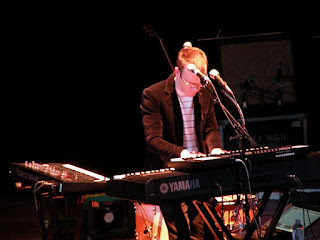 We were fortunate for this show to have obtained front row balcony seats at Massey and will be forever spoiled going forward at this venue. All settled into our primo seats, we were surprised when the lights went down and the keyboardist (Todd Lumley, a.k.a. Mr. Lonely) came to the stage and started playing a medley of Hawksley tunes as an opener before the rest of the band and Hawksley himself took the stage...no opening band! Made sense after the fact because they had a wealth of material to play for us, and in fact did a non-stop 3 hour show, so really no room for an opener. Suited me just fine. Hawksley Workman was who I came to see perform and perform he did and then some!

The atmosphere for the show was one of a lengthy jam session with all of their friends in attendance. Hawksley chatted up the audience as if we were sitting in his home (and he in fact referred to the stage as his "bedroom"...complete with spotlights and chairs for spectating, ha!). I liked the easy casual atmosphere. While he is a definite performer in a big way, there were no instances of planned theatrics...the funny moments were completely random and unplanned and therefore that much more enjoyable for their spontaneity (aside from the leather jumpsuit debacle, photo below....explanation? He was bringing out his Cheval guitar for a few tunes, therefore had to have "Cheval wear"). 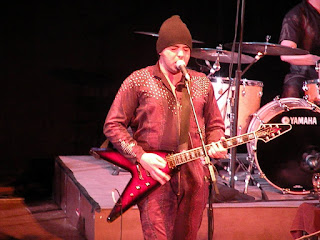 Jakki and I were in hysterics at one point when the Guitar tech brought out his red "flying V" (also pictured), and he launched into a lengthy description of how much he loved this particular guitar:
- large dirt mark on his chest from where it lays
- that he washes around it (washes into the V...but not too deep into the V...motioning...)
Carries it on the plane, not checking this baby...security stops him with "Is this Lethal?"(he answers "Yes!")
-Security scans the dirt mark on it and asks if it's magnetized and his response being "of course...I happen to sweat nickels!".

By the end of his rant, which must have gone on for 10 minutes, Jakki was snorting, and I was crying. You may have had to be there (probably), but he's a funny guy with his straight delivery. I love a talky musician because it makes you feel like you're one of his friends, that we're all just sitting around, listening to a jam and shooting the shit. Last night, it was a very friendly atmosphere.

During this show, I paid particular attention to Hawksley as a musician. He has an amazing voice, this man. It's velvety smooth and has a variety of range from a silky quiet whisper to a belting falsetto that fills the Massey venue. THAT, I've always known. He took to the drums for one of the songs (believe he started out playing drums as a kid, a fact we gleaned from story telling at his last show at Massey in 2008, and also plays bass and keyboards).

In particular, I really dug his guitar playing. 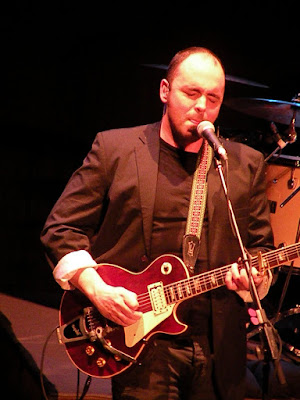 He had no less than 5 guitars that he interchanged depending on the song. I realized, watching him, that he is an EXTREMELY talented guitarist. There were times that I completely zoned out of the song and just got absorbed in the guitar work, and was completely blown away. From a sensual caress of the strings, to intricate finger work, to downright frantic and vigorous manipulation of all aspects of the instrument, the guitars under his hands made very pleasurable sounds of varying intensity, and I've come to the conclusion that he interchanged them so frequently because the guitars had to go back stage, lay back, have a cigarette and compose themselves before they could "go" again after he'd worked them over. Awesome!(I'm sure there is a technical/sound preference reason for the constant switcheroo, but I like my theory just fine thanks!)

For a 3 hour show, it went by in a flash, which is always a sign that I'm "in" and engaged. He came back for two encores (his final song, you could tell that his voice was shutting down due to his cold, which he relayed to us was obtained from licking door handles at the airport and touching his boarding pass to his eyeball :-). He set out to entertain, and entertain he did. Hawksley Workman was home, and wanted to spend his Saturday night, his whole Saturday night, with his friends. 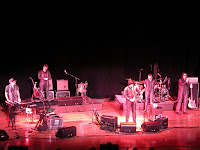 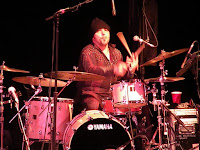 Hawksley Workman is a true Canadian musician's musician who counts himself lucky to be able to perform his own work to an audience on a regular basis, and even made a commentary that in doing so, it's his fortunate side project and that his true income (sadly)comes from writing songs for those who "look good on TV" (he counts Kylie Minogue and Kelly Clarkson among those he's written pop songs for). Me? I count myself lucky that we can experience him at his most creative in all his glory. While he's taken on the name Hawksley Workman for his stage persona (real name is Ryan Corrigan), this is the only manufactured thing about him, and it was a pleasure listening to him play for us in all his sincerity and stripped down talent. He isn't looking to be commercial, even though he is capable of it. He is what he is....One of few authentic homegrown musicians out there and he will remain, one of my concert staples.